Rimbi High pupils shut down school over abuse of funds 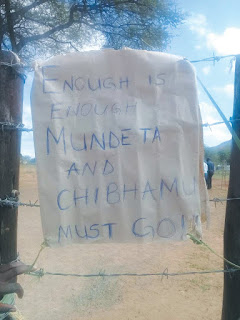 CHIPINGE – Angry pupils at Rimbi High temporarily blocked entry into the school in protest against alleged blatant abuse of funds and poor management by school head, Phineas Mundeta.
The rowdy demonstrations saw pupils locking school gates and making loud chants denouncing Mundeta whom they accused of, among other things, buying a faulty FAW school bus which broke down a little more than one year after purchase.
Police details were seen at the school after being called by Mundeta who reportedly felt threatened by the developments. School activities resumed only after 15:00 hrs after the police managed to calm down tempers.
School Development Committee (SDC) chairperson, identified as Douglas Chibhamu, is said to have called for an urgent meeting with parents and teachers on Wednesday, January 31, to try and resolve the conflict.
TellZim News learnt that pupils were angry that they had to find their own transport when travelling for seminars, sporting events and other school programmes because the bus, which was bought in 2015, was no longer working.
One pupil said the belief was that the school head deliberately bought the faulty bus because he had been given kickbacks by the dealer.
"The head was always hiring the bus out to Chibuwe High School and other institutions yet it was faulty and this worsened its condition. Right now, we are still required to pay the $10 bus levy but we have never used the bus," said the pupil.
A teacher who agreed to speak to TellZim News on condition of anonymity praised pupils for demanding accountability.
"The bus is said to be in Harare for repairs but we are all not happy with how things are being handled. The head bought a different bus from the one that parents had identified," said the teacher.
When contacted for comment, Mundeta refused to comment and referred all questions to Chipinge District Schools Inspector (DSI) Richard Gabaza who, in turn, said he had not yet received formal communication about the matter.
"We received the news and we are still to get to the school. We need to first gather more details about the strike," said Gabaza.local
Share !