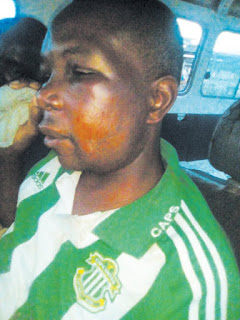 CHIREDZI - Members of the Zimbabwe National Army (ZNA) allegedly ran riot in Malipati last Friday night, vandalising a Chiwara Bus Service coach, beating up its driver and conductor, and terrorising its passengers whom they accused of being border jumpers.
The case was reported to Chikombedzi Police Station where a police officer reportedly failed to record a statement from the soldiers because they were very drunk.
When TellZim News sought a comment, Masvingo Police spokesperson, Inspector Charity Mazula said she had not received the report.
However, people who spoke to TellZim News said at around 23:00 hrs, the bus, which was travelling from Chiredzi to Dhavata, dropped some passengers at a place called Corner 18.
Some of the disembarked passengers met a group of eight drunk soldiers who threatened them, forcing the terrified travellers to run back and get onto the bus.
The soldiers, reportedly led by one Lt Serimani, followed them and ordered the driver to release the passengers whom they wanted to 'deal with' but the driver refused.
This angered the soldiers who then allegedly shattered the windscreen, damaged the tyres and assaulted Shepherd Matambo, the driver and Thomas Macharaga, the conductor.
Maxwell Chiwara, who is the proprietor of Chiwara Bus Services, blamed acts of hooliganism by the soldiers for the damage to his bus and the assault on his employees.
"Soldiers vandalised my bus and tortured my employees after he refused to force passengers out. The windscreen was damaged and tyres punctured by the soldiers who claimed to have power over all affairs in this country.
"They accused our passengers of being border jumpers but do we need passports to move from one province to another? The bus was travelling to a place which is close to Matabeleland South province and that is some 30 km to the border with South Africa. How then could we be accused of ferrying illegal immigrants?" said Chiwara.
Chiredzi South Member of Parliament, Rtd Brig Gen Kalisto Gwanetsa criticised the conduct of the soldiers saying their actions were detrimental to investment in the transport potential of the area.
"Chiwara has been an all-weather friend on the routes of Chiredzi South. We have a lot of enquiries from various operators who want to explore local routes but I am afraid if they get to hear about this, they may as well decide to stay out," said Gwanetsa, adding that he had spoken to authorities at 4 Brigade about the incident.local
Share !