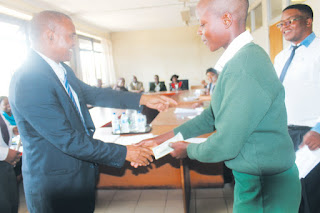 MASVINGO – Two pupils from the province won the first and second prize in the Southern Africa Development Committee (Sadc) quiz competition while the third one won the ozone layer quiz competition held recently.
Felistus Mauta from Chimbwembwe Secondary School in Zaka took the first price in the Sadc competition at national level and walked away with US$500 while Tanaka Handina from Nyaningwe High School in Chivi district took the second position and walked away with US$300.
Tanyaradzwa Muchochomi from Runyararo Primary School also scooped the first prize in the ozone layer depletion quiz competition sponsored by the Ministry of Water, Environment and Climate but her price was not disclosed.
Speaking at the price giving day, the Provincial Education Director (PED) Zedius Chitiga thanked the pupils for working hard and putting the province on the map. He also thanked the teachers and the District School Inspectors (DSI) for their hard work.
"I want to thank the inspectors, they work hard to ensure a good learning environment for the pupils. I want to thank the winners, they have made us proud and have put the province on the map," said Chitiga.
Felistus' mentor, Mellen Zindove, a debate teacher at Chimbwembwe Secondary School, said she had not expected the pupil to shine as much as she did.
"Of the three participants at our school, she seemed the least performer so I had not expected her to make it past district level. I am thrilled that she has proven us all wrong and exceeded our expectations," said Zindove.education