Mucheke River chokes with hyacinth that nobody wants to remove 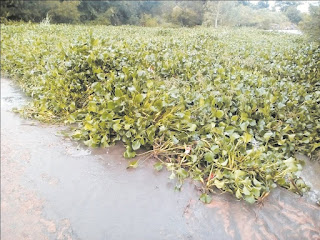 MASVINGO – The heavy rains that were received on the night of Wednesday, February 21, 2018 exposed the extent of the rot in Mucheke River which is corrupted by all kinds of suffocating filth including a massive infestation of water hyacinth.
The river is one of the few sizeable tributaries whose waters feed Lake Mutirikwi, City of Masvingo's only source of water.
The heavy rains uprooted heavy loads of the river's water hyacinth, an invasive weed that seems to thrive much in filthy stagnant waters.
A thick blanket of the floating weed was driven downstream under strong current before being heaped against a bridge used by pedestrians going to and from Rujeko.
Efforts to have the weed removed immediately failed to materialise, with officials in the Environmental Management Agency (Ema) saying their officially ascribed duties did not extend beyond monitoring water pollution.
"Our role in that is to monitor and prevent pollution of the environment including pollution of water bodies. I am glad we have managed to stop the discharge of raw sewerage into the river, one of the factors that contributed to the growth of the weed.
"Council used to have a hyacinth removal programme in the past but I don't know what happened. They are probably facing shortage of the required equipment," said Somandla Ndlovu of Ema Masvingo provincial office.
City of Masvingo Town Clerk, Adolf Gusha acknowledged it was council's duty to clean up the river but initially said they usually wait for the hyacinth to reach the lake where it is 'easier' to remove.
"I have not yet had a chance to go and check what it is like there, but we normally wait for the weed to reach the lake. It is easier for us to remove the weed when it gets to the lake," said Gusha.
He however later resisted attempts to get an explanation as to how it was easier to remove the weed when it gets into a vast dam while it is much more difficult to remove the same from a narrow river.
He told TellZim News the matter had already been taken to other 'relevant' offices and he was awaiting a decision on the way forward.
Eight days later, TellZim News noticed that the weed deluge was still intact, and had formed a thick mat spreading onto the river banks.
Between 2014 and 2015, the Family and Friends of Rivers and Lakes in Zimbabwe (Faforaliz), an organisation which in the past has led efforts to remove water hyacinth from large portions of the river, designed a hyacinth-pulling tool called the pigato.
Using two pigatos, Faforaliz tugged away about 450 tons of water hyacinth from a 5.7 square-metre section of Mucheke River.
Just as it seemed real progress was being made, Ema reportedly developed sour grapes, and the relationship broke down leading to the work being immediately stopped.
Ema reportedly grabbed the equipment, claiming it was all now part of their inventory and has resisted working with Faforaliz ever since.
Faforaliz information and publicity director, Ngoni Chinovava said his organisation was, nevertheless, willing to volunteer manpower yet again in order to remove the toxic weed once Ema releases the equipment.
"That weed is a danger to human and aqua life so we are ready to resume our voluntary work. We just need the equipment that Ema seized so that we can use it for the good of our rivers and dams. We designed the equipment ourselves and we want to apply for patents because that is our intellectual property," said Chinovava.
No comment could immediately be obtained from the Zimbabwe National Water Authority (Zinwa) who, by law, are the custodians of the country's water resources.
The Food and Agricultural Organisation (Fao) lists water hyacinth as one of the worst aquatic weeds in the world, causing a drastic change in the physical and chemical properties of water and in the environment of the water bodies it invades, with detrimental effects on plants and animals.
"This weed represents an environmental problem as well and indirectly a public health problem, since it may create a microhabitat suitable for the breeding of many vectors of human diseases and for hosting poisonous snakes," reads one of the reports compiled by Fao.local
Share !