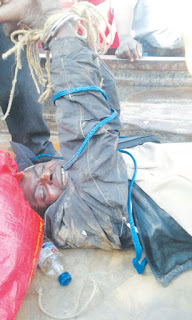 MASVINGO – Magistrate Dambudzo Malunga on Wednesday afternoon sentenced notorious rapist and alleged murderer, Charles Matanga to 72 years' imprisonment on eight counts of rape.
Matanga had perpetrated a reign of terror in Chivi district and other parts of the province before being arrested near Ngundu business centre earlier this week
On the first count, the State's case, as presented by Mukai Mutumhe, was that Matanga threatened a 13-year-old girl with a knife, dragged her into the bush and raped her.
On the second count the accused applied the same tactics to rape his victim.
Matanga also demanded victims' belongings after raping them and it was heard that he demanded a cell phone from complainant number three.
On count four, the perpetrator induced fear into a minor and an adult before raping the minor while hiding his face behind a mask.
It was heard that Matanga struck his victim number five with an axe on her ear and at the back of her neck before raping her.
On count six, the perpetrator threatened a minor with an axe and raped her.
The accused assaulted his seventh victim with a log and she fell down, and he raped her as she lay unconscious.
On the last count, Matanga assaulted the complainant with an iron bar, cuffed her with chains and raped her countless times.
In passing judgement, Malunga considered the fact that Matanga is not married, has no children, is not employed and did not waste the court's time denying the charges against him.
The magistrate also considered that the accused caused physical harm on his victims, traumatised minors and behaved like an animal.
The first, fourth and sixth counts of raping minors earned him 20 years imprisonment with two years suspended on condition that he does not commit a similar offense in the next five years.
On count five, the rapist was sentenced to 14 years imprisonment but two years were suspended on condition that he does not commit the similar offense. On the third count, Matanga was sentenced to 10 years imprisonment.
Count two and seven earned him 10 years in prison while count eight attracted for him 14 years imprisonment with two were of them being suspended.
Matanga will soon be in the High Court to answer several murder charges some of which he allegedly committed after raping the victims.