Nyabinde too hard for Sugar Boys 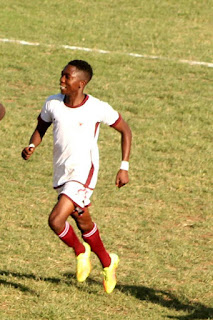 Bvaru Bvaru midfield dynamo Joe Nyabinde
Exsto Makunzva
ZVISHAVANE - Pint-sized yet hard-tackling Shabanie Mine FC defensive midfielder, Joe Nyabinde proved to be too hard for Triangle FC, thwarting many moves made by the visitors in a Premier Soccer League (PSL) season-opener played at Mandava Stadium last Sunday.
Nyabinde, who was loaned back to Bvaru Bvaru after moving to Bulawayo side Chicken Inn, made a remarkable contribution leading to the 1-0 defeat of Triangle FC.
A goal by David Temwanjira in the 52nd minute separated the two teams and Bvaru Bvaru managed to collect their first set of three points on the first day of the 2018 season.
Despite his stature, Nyabinde was able to deal with aerial balls in front of his defence and had excellent cohesion with the rear guard and the wings towards where he spread some impressive passes.
Speaking to the media after the match, Bvaru Bvaru gaffer Takesure Chiragwi was happy with the performance of his team.
"We played as a team and won as a team. With a bit more luck, we could have won by a bigger margin; that is if we had managed to fully exploit the chances that we created in the first half," said Chiragwi.local
Share !