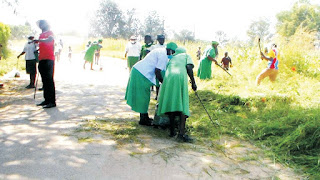 GWERU - The Shamrock Park Seventh Day Adventist (SDA) church in Mambo suburb last week went on a clean-up campaign and cleared some thick bushes and tall grass that residents said had become a hideout for criminals.
The church also sought to promote a healthier environment by donating four rubbish bins.
Khumbulani Mlambo, an elder at the congregation said the SDA was responding to the need to contribute in the fight against litter and the rise in crime levels in the community.
"We are doing this programme to help the community prevent crime. It is pointless for us as members of the community to repeatedly report issues of violence and robbery to the police when we have not done our part to prevent the crime," said Mlambo.
Ward 7 councilor Stanford Mukotami, who gathered protective clothing used during the programme, said he was pleased by the initiative which he said should be replicated in many other areas by all church denominations.
"I am happy to see the SDA church making the initiative to take a leading role in safeguarding our communities and promoting a healthier environment. We also wish to partner the church so that we can clear illegal dumpsites and other areas with large heaps of garbage," said Mlambo.local
Share !