Wetlands must be conserved, says Ema 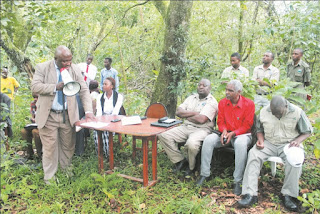 BIKITA - Environmental Management Agency (Ema) Masvingo provincial manager, Milton Muusha has encouraged communities to respect wetlands and take care of them for future generations.
Muusha made the call while addressing villagers gathered at Matungamire wetland for the belated World Wetlands Day commemorations.
The event was organised under the 2018 World Wetlands Day theme: Wetlands for a sustainable future.
World Wetlands Day, which is marked February 2 each year, was commemorated in Matungamire Village, Ward 15 in Bikita where villagers have established market gardens taking advantage of water that flows from the mountains all year around.
Wetlands (matoro/mapani in Shona) – which are areas where water covers the soil, or is present either at or near the surface of the soil all year round or for varying periods of time during the year – have an invaluable economic benefits.
Muusha said wetlands were safety nets in times of such climate shocks as droughts and floods.
"Wetlands do not only help with food but they are also critical in times of disasters like floods. They absorb water and prevent flooding and as such, they must be preserved and respected," Muusha said.
Bikita assistant District Administrator (DA) Innocent Mutingwina praised the people of Maringire for harnessing the economic potential of their wetland.
"These wetlands are sustaining livelihoods by providing clean water to people and their animals and crops are being grown here," said Mutingwana.
The event was also graced by representatives from the District Development Fund (DDF), Agritex officials, Ward 15 councillor Ishmael Kanjera, Forestry department officials as well as pupils and teachers from Silveira High School.local
Share !