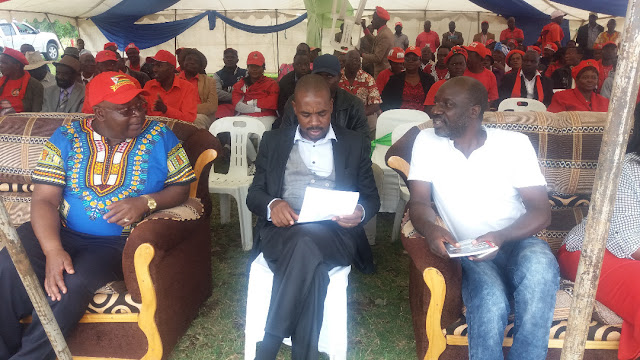 BIKITA - MDC-T president and MDC Alliance presidential candidate Nelson Chamisa met a backlash last week during a rally at Nyika growth point where Masvingo provincial chairperson James Gumbi openly declared that he will defy Alliance agreement by fielding candidates in constituencies reserved for Alliance partners.
A visibly shaking Gumbi declared, 'over my dead body', that he would field MDC-T candidate in constituencies reserved for Alliance partners like Bikita East which was allocated to Transform Zimbabwe (TZ).
"…I will not allow anyone to contest in those constituencies that our people suffered; over my dead body. We are going to field candidates in these candidates because we are emotionally connected because our people were tortured and killed like in Bikita East," charged Gumbi.
The Masvingo chair's sentiments were viewed as anti-alliance thereby forcing Alliance president Nelson Chamisa to read riot act.
Chamisa humbled Gumbi saying this election needs all opposition parties to pull their resources together to defeat Zanu PF.
"I listened to chairman Gumbi making a declaration. I listened to you saying it cannot be done but we say no because we have the vision of our late leader President Tsvangirai  who told me to work with everyone and I will be Joshua.
"Joshua doesn't walk alone; he needs helpers. On that you don't make a declaration. We are now giving you direction and it will not be contested because that is leadership and that's a directive.
"When we give you direction you follow, you don't come and question why it has been done the way it is. We however, will consider the strongest candidate in each constituency," said Chamisa.
Gumbi's sentiments were taken as anti-alliance forcing other party supporters to accuse him of being a Thokozani Khupe's stooge.
Khupe's anti Alliance concerns, which got her persecuted and led to her ultimate dismissal from the party, are beginning to take root in some party officials who believe they are being too generous to their Alliance partners by giving them more than they deserve.
Political analyst Dr Takavafira Zhou, commenting on the MDC Alliance, wrote "As much as we are not against the issue of an Alliance, we must also note that we were too generous in allocating constituencies to partners who do not have a foothold in some areas.
"So as much as the Alliance is a way of maximising votes, we may end up frustrating voters if we are not careful in our distribution matrix. The idea of the Alliance is noble but there was no scientific way in distributing some constituencies so much that a rationalisation process is needed".
In the run up to the 2008 presidential June runoff, the ruling Zanu PF launched a terror campaign against the MDC-T supporters with Bikita and Zaka in Masvingo being the most terrorised.
MDC-T supporters were brutalised and killed, some petrol bombed in the Zaka district office forcing Tsvangirai to pull out of the re-run election.top news