Home » »Unlabelled » 'Renco a threat to our safety'

'Renco a threat to our safety' 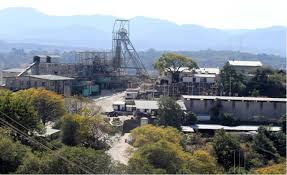 ...villagers accuse gold miner of endangering community
Moses Ziyambi
Haphazard expansion of the Renco Mine lease area has endangered many lives as some underground mining operations are now being done directly below homesteads, leading to cracks and crevices on many houses, villagers in Nyajena have complained.
Most affected are 17 homesteads in Muvango village where people's houses are taking a battering from thunderous blasting in the mine's Iona shaft.
Villagers who spoke to TellZim News said for several years running, they have not been able to enjoy a good night's sleep owing to the noise that shakes their houses to the foundations.
"It began in 2008 when we heard that the company had applied to have its claims expanded. The mining activities then started to slowly progress towards our village and we are now sitting directly above big underground holes. The ground often shakes due to massive blasting and our houses are cracking. You can't sleep anymore," said Kennias Mafembe.
Other villagers said their livestock too had been put along harm's way as the mine is reportedly discharging cyanide waste into a stream where they drink water.
"Cattle are dying after drinking toxic water in Nyabata River into which the mine is discharging some of the waste that is generated during the gold production process. As a result, we now have to tend to our cattle throughout the year even during the dry season when there are no crops in the fields," said another villager who preferred not to be named.
Mujena Muvango, who is Muvango village head, concurred, saying the mining company was riding roughshod over hapless villagers.
"Nobody and nothing is safe anymore. We can't sleep and our cattle are not safe. I myself recently lost a cow to the poisoned water. We have for long tried to engage the mine and the government so that we could be resettled elsewhere but to no avail. They do not seem to care about the most basic concerns for human and environmental safety," said Muvango.
He also said some parts of the village land was curving in due to the massive pounding of the ground below. This, he said, was creating dangerous gullies that the mining company was showing no interest in covering.
When contacted for comment, Renco Mine manager Nyorekai Mafurutu, surprisingly, said he did not know anything about the high profile issue which, however, reached the provincial mines office almost 10 years ago.
In 2009, the Ministry of Mines and Mining Development sent two inspectors of mines and explosives to probe complaints of noisy drilling and blasting underneath several village homesteads. They found that there was indeed cause for serious concern as villagers were being subjected to the daily discomfort of loud jackhammering and exploding dynamite.
"In accordance with Section 80 of Mines and Minerals Act (Chapter 21:05) …. for the mine to operate without disturbances from the local community is enforced to compensate the households which are located near or above the mine workings and are disturbed by underground drilling and blasting operations conducted by Renco Mine, taking place under/below their households in order that through the authority of their Kraal Head and Chief, they can be resettled in a safe area from the mining activities," reads part of a letter, dated July 06, 2009 and signed by the then regional mining engineer C. Fusira.
The letter was copied to many people including Chief Nyajena, the village head and the RioZim managing director but sources within the mine who spoke to TellZim News said the provincial mining office had not done anything to enforce its own recommendations that people should be compensated and relocated.
The sources said Renco Mine did not want to foot the cost of relocating them and has been dragging its feet while silencing the most vocal of the affected villagers by giving their children token jobs at the mine.
TellZim News approached provincial mining director, Sibongubuhle Mpindiwa who acknowledged the issues at hand, saying follow ups on the case were being made.
"The complaints date years back so we are carrying on with the work that was done. We want to get to where the matter was left so that we can see how we can intervene for the benefit of all stakeholders," said Mpindiwa.
She also revealed that the latest complaints from the villagers had been lodged through Masvingo District Administrator (DA) Ray Hove with whom she promised to work closely to resolve the problems.
Meanwhile, the villagers have indicated they may soon take up their case with the Zimbabwe Lawyers for Human Rights (ZLHR), claiming that government had dismally failed to help them over the last decade.
ZLHR programmes officer responsible for communication and information, Kumbirai Mafunda could not immediately be reached for comment.
Owned by Zimbabwe Stock Exchange (ZSE)-listed RioZim, Renco Mine reportedly produced 688 kg of gold in the previous financial year, contributing significantly to the group's after-tax profit of US$8.1 million after revenue grew 36 percent from the previous year to US$88 million riding on high prices on the global commodities market.
Last month, Minister of State for Masvingo Provincial Affairs, Josaya Hungwe revealed that diamonds had been discovered in Chivi, with RioZim expected to soon begin work at its 3 000 hectare piece of land and is negotiating to be given additional ground for exploration work.
Share !