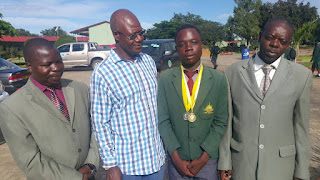 From left: Zimuto High deputy head Jonathan Makaudze, Rev Wilbert Runyowa,  Tadiwa Mwerecha and Zimuto High School head Harris Mashava
Clever Taperamoyo
A Zimuto High School athlete, Tadiwa Mwerecha recently scooped a gold medal and silver at the just-ended National Association of Secondary Schools Heads (NASH) athletics competitions held in Bulawayo.
Being the only contestant from Zimuto High School participating in his particular field, Mwerecha put up a splendid performance that saw him winning a gold medal in the 100 metres race and silver in the 4 x 400 metres relay.
Mwerecha has three other gold medals and one bronze that he won at provincial level.
His trainers; Maxwell Garira,  Apollonia Chihona,  Marvellous Chikerema and Kudakwashe Hungwe were happy that the pupil had given his all to do the school proud both at provincial and national levels.
Zimuto High School head, Harris Mashava said the school was celebrating Mwerecha's remarkable performance which he said had helped to build the school's own good brand.
"As a school, we feel proud of this great achievement. We appreciate the efforts invested and the dedication shown by the pupil as well as his trainers to make his experience at the competitions fruitful," Mashava said.
The elated school head also thanked the athlete's trainers and his teachers whom he all gave credit for continuously nurturing the teenager's great potential.sport