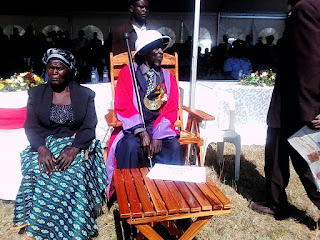 Caroline Gumbo
ZVISHAVANE - Kennias Mnyamani Moyo (69) was recently installed new Chief Wedza at an event officiated by the Minister of State for Midlands Provincial Affairs, Owen Ncube.
The inauguration ceremony was held at Rusvinge Primary school grounds where Moyo did his primary education.
The 69-year-old Moyo, of the Mdonga family, was appointed by President Emmerson Mnanagwa and was selected in accordance with the Wedza-Masukume traditions and customs.
He succeed Phillip Hlati Tumbudzuku of the Zibanayi house who died on October 11, 2014.
The collateral succession custom rotates the chieftaincy among the Musiwedzingo, Zibanayi and Mdonga royal families by order of seniority of family members.
Moyo was born on the April 19, 1949 and did his primary education at Rusvinge Primary school up to standard three.
He then started working as casual labourer at the National Railways of Zimbabwe (then called Rhodesian Railways) and Kadoma Patchway Farms before resorting to full time subsistence farming at his homestead.
Moyo is married to Lucia Mudhonga and they have eight children and nineteen grandchildren.
Oral tradition says the Wedza chieftainship, of the Masukume people, originated from Swaziland.
It is said the Masukume people failed to cross the Zambezi River and decided to settle in the Wedza area in Mashonaland Central before moving to Shawasha in Masvingo.
Thereafter, they were invited by King Lobegula of the Ndebele to settle at Mpopoti in present day Matabeleland South before migrating to Ture YaWedza Mountain which became their stranglehold which they have held to this day.local