Critical shortage of magistrates in Manicaland 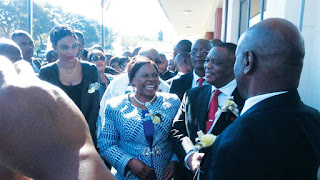 MUTARE – The Minister of State for Minicaland Provincial Affairs, Monica Mutsvangwa has pleaded with government to deploy more magistrates in the province to ensure quicker justice delivery to the people.
Speaking at the official opening of a High Court building in Mutare, Mutsvangwa told Vice President Constantine Chiwenga, who was the guest of honour in his capacity as Acting President, and Chief Justice Luke Malaba that there was a serious backlog at the magistrates' court.
"Allow me to register the province's concern over shortage of magistrates. I am told there are only three magistrates at the Mutare Magistrates' Court including the provincial magistrate who is also involved in administrative work.
"The three court houses in Nyanga, Mutasa and Murambinda have two court rooms each but only one magistrate, leaving the other court room idle, something we do not wish to happen as the majority of the cases of our people are heard at these courts," said Mutsvangwa.
In response, Chiwenga acknowledged the problems, saying government was aware and will work to make the issue urgent.
"Yes I am aware that there are challenges of staffing which occasionally receives assistance from Harare. I want the Ministry of Justice, in conjunction with the Ministry of Finance and the Judicial Service Commission to work towards solving this matter," said Chiwenga.
The newly-opened High Court, which was formally a cinema house, becomes the fourth permanent High Court in the country after those in Harare, Bulawayo and Masvingo.local