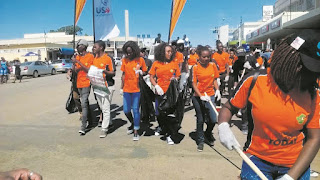 GWERU - The National Aids Council (Nac) recently partnered some concerned local artists for a concerted campaign against the stigma associated with HIV and Aids.
Running under the theme 'Addressing Stigma and Discrimination Through Sports and Arts', the programme sought to increase understanding of HIV and Aids, as well as debunking the myths that still persist in society despite some progress being made.
Gweru Artists Against HIV and Aids coordinator, Elias Maginya, who is also known as DJ Vas, said there was need to continue raising awareness on HIV and Aids as well as on other infectious diseases through music, poems and drama.
"Art is a powerful medium through which the message can better reach such critical targets as bars and night clubs as well as transport operators and the general public. We have come together as DJs, MCs, gospel artists and singers of other music genres in our common recognition of the important role that we can play in influencing positive change.
"We are encouraging each other to go and compose songs to fight new HIV infections while promoting zero tolerance to stigmatisation of people living with HIV and Aids. This is our own small way of contributing to this big struggle," said Maginya.
He said although being possible agents of change, artists themselves were not immune to the virus but could, in fact, be at a higher risk of infection due to the nature of their work which involves travel and meeting many different people.
"Matters of sexual and reproduction health are also of great concern to us because we meet a lot of people at clubs, shows and galas. We are therefore pleased to be in partnership with Nac which is encouraging us to be good ambassadors," he said.
Midlands Nac coordinator, Muraru Hwingwiri praised the joint sensitisation programme, saying his organisation was working to bring more stakeholders on board.
Some common stigma associated with HIV and Aids is the false belief that the virus can only be contracted through promiscuous sexual intercourse and that being HIV positive is the end of one's life.
People living with HIV and Aids also face discrimination from family members and friends, out of the mistaken belief that, for example, sharing utensils with them is risky.health