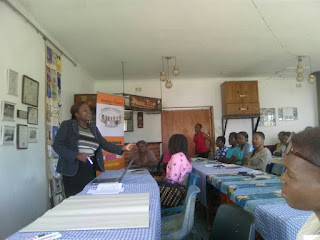 Mwale leads proceeding at the event

TellZim Reporter
MASVINGO – Women's Coalition of Zimbabwe (WCoZ) Masvingo chapter last week organised a workshop at Charles Austin Theatre where emphasis was put on the need for society to fight abuse in all its forms.
WCoZ Masvingo Chapter coordinator, Belinda Mwale lamented the prevalence of sexual abuse at work places.
"We want to stand up for girls who face abuse at their work places. Girls doing work related learning are particularly vulnerable. We want to encourage girls to reject exploitative sexual advances even though they could be in desperate need for work related learning and marks. Nothing is more valuable than the sanctity and health of their bodies," said Mwale.
She also talked about the sexual abuse of women by their husbands, saying many victims were not willing to talk, with some of them withdrawing cases that warrant convictions.
"Women should work for themselves so as not to rely on their husbands for everything. Women who are totally dependent on their husbands for livelihoods tend to suffer abuse in silence," Mwale said.
Other stakeholders who attended the workshop included women with disabilities who called for greater inclusion to foster mainstreaming.
"Women with disabilities suffer double trouble. We are undermined because we are women, and we are again undermined because of our disabilities. We are calling for greater representation in committees of such organisations as WCoZ so that we can champion our own issues. There really can be nothing for us without us," said one participant.
WCoZ is a non-governmental organisation working as a forum for women to engage in collective activism while discussing issues that affect them.local