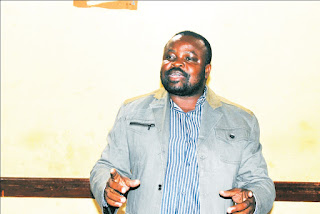 CHIREDZI - Incumbent Chiredzi West legislator, Darlington Chiwa, who automatically expelled himself from Zanu PF by registering to contest as an independent after losing to Farai Musikavanhu in the primaries, is giving the ruling party sleepless nights in the constituency.
Sources in the ruling party told TellZim News that many bigwigs will soon visit the town to try persuade Chiwa to withdraw from the race.
Local party leaders are also going out of their way to discredit Chiwa, with Musikavanhu last weekend addressing a rally in Ward 27, Triangle, where the anti-Chiwa diatribe reigned supreme.
The meeting was attended by the provincial leadership of the party and several war veterans.
Chiredzi war veterans' chairperson, Killer Makuni branded Chiwa a sell-out, saying the MP had proved beyond doubt that he was not loyal to the party.
"We should only be following Zanu PF not independent candidates. Chiwa should come to apologise to us war veterans in order for us to accept him. Pasi naChiwa," said Makuni.
Chiwa and Makuni clashed last year, with the former opposing wholesale invasion of Tongaat Hulett's sugarcane plantation for resettlement purposes.
Speaking at the same meeting, the party's provincial vice chairperson, Ailes Baloyi said Chiwa had no vote in Chiredzi West as all people were going to vote for Zanu PF only.
"This (Ward 27) is where Chiwa has a strong base and we want to assure you that he won't get anything. People will be voting for Zanu PF not independent candidates," said Baloyi.
Provincial chairperson, Ezra Chadzamira also threw his weight behind Musikavanhu, describing Chiwa as an untrustworthy individual who faked love for Zanu PF.
"We watched him for a long time as he pretended to be one of one of us. On nomination day, we saw him coming to register as a candidate. So if you are Zanu PF, disassociate yourself with Chiwa and work with Musikavanhu," said Chadzamira.politics
Share !