Home » Court » Chiyadzwa diamonds: ZCDC no better than the Chinese 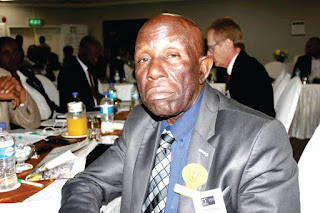 Chief Chikukwa of Marange follows proceedings at a ZCDC security indaba held at Holiday Inn in Mutare this week. His people are among the poorest in the country despite being hosts to lucrative diamond fields that have been exploited for the past 10 years

MUTARE - Villagers of Marange as well as those resettled at Arda Transau Farm have blasted the Zimbabwe Consolidated Diamond Company (ZCDC) for failing to differentiate itself from the Chinese companies that were kicked out of the diamond field in 2016.
Government formed ZCDC after forcing out five companies, including the Chinese-owned Anjin and Jinan, that were accused of failing to honour their developmental obligations to the host community and cheating the government of critical revenue.
Local people, however, maintain nothing has changed ever since, with the new government-owned miner continuing to exploit the precious stones without doing anything good for the community.
Last week, iTell News visited Arda Transau Farm and witnessed first-hand the acute poverty that the people are living under.
Young girls were collecting firewood for sell at the nearby Odzi business centre.
Houses were cracked, displaying the poor workmanship of the Chinese companies that built them in their rush to get the villagers off the lucrative diamond field.
Out of seven boreholes that ZCDC claims to have drilled, iTell News saw only two, one of which does not work, while the other was reportedly drilled using funds raised by the community itself.
One of the community members, who identified herself only as Mrs Bendezi, said apart from payment of electricity bills, all diamonds companies had never helped them in any way.
"These people lie. The only notable thing they have done was the payment of electricity bills which helped to ensure the reconnection of water to the area," she said.
Another resident, Amos Chikosi said ZCDC once came and promised to establish an irrigation scheme but nothing has happened.
"They came and addressed us, captured some pictures and left, and that was that. Schools, clinics and other social amenities haven't improved," said Chikosi.
Other people living in communities close to the diamond mines told iTell News that when their livestock stray into mining area, they cannot freely go and drive them back as there is always the danger of being shot or arrested.
ZCDC last week held a security indaba at the Holiday Inn in Mutare where the company's CEO, Morris Mpofu tried to paint a different picture of what is actually happening on the ground.
His presentation was, however, dismissed by representatives of the people of Marange, who accused him of using empty words to cover up the company's shoddy record in the area.crime
Share !