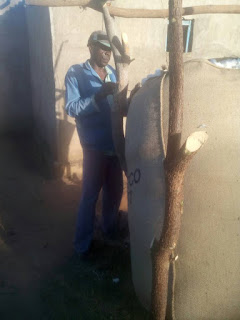 Chiundidzi works on his bale of cotton

Alexio Rashirai
RUSHINGA - Low international lint prices have affected cotton growers globally and even worse for Zimbabwe whose farmers' competitiveness in the field has been declining over the years.
Due to even lower cotton prices, most people in Rushinga have now resorted to growing groundnuts and some have tried tobacco.
Insing Company, which used to quote fairly reasonable rates, closed its ginnery in Rushinga owing to low cotton deliveries, dealing a devastating blow to the hundreds of people that the company used to employ.
The effects were also felt by such farmers as 52-year-old Givemore Chiundudzi.
Wearing a blue work suit jacket, with a cap sitting in a slanting position over his grizzled head and his hands clutching a log which he uses to ram his cotton bags, Chiundudzi is trying to imagine a 'cottonless' future now that conditions are deteriorating.
He sits on a curved wooden tree trunk, half the size of a drum, with several bags of packed cotton lined in front of him.
"All the cotton in these plastics must go into this bale. The more the bale weighs, the more it fetches. If it were long ago, I could be rich with this one bale," he says as he sticks more cotton from the plastics into the bale lying on the ground.
This is his only bale for the year, from which he hopes to get money to meet all his family needs until the next harvest, though he is not even sure how much the bale will fetch.
"I do not know. It depends on how much it will weigh. They are buying at 47 cents per kg and this bale weighs probably 200 kg. In the past, you could buy a cow, build a three-bedroomed house and do anything else after selling a bale like this. Now one bale cannot give you anything," Chiundudzi complaints.
He says even though most of the cotton farmers have entered into contract farming with Cottco, which provides them with inputs that is seeds, fertilisers and spray pumps for free, all of them were not happy with the 47 cents/kg buying prize.
"Upon delivery, we are given $20 cash and the rest is put into our EcoCash wallets. To get the money out the phone is very expensive; you pay $28 or $30 for every $100 you want in cash. They are ripping us off and leaving us poorer.
"Cotton is our cash crop here but many people have since diverted to tobacco farming due to the unfavourable conditions. It is also not easy to grow tobacco here because our soils are better suited for cotton," he says.business