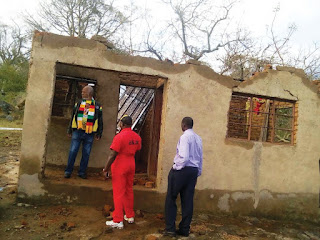 Omar, in scarf, at one of the destroyed homes in Mwenezi East

MWENEZI - More than 400 households from different wards of the district were recently left destitute after heavy hailstorm destroyed their homes.
The hailstorm killed one person in Ward 8, while many other people were hospitalised, and the victims are now looking for assistance to rebuild.
Mwenezi East MP, Joosbi Omar has visited some of the victims, coming face to face with people who are now leaving in makeshift shelters with little or nothing to eat.
Speaking to TellZim News after visiting Ward 7 and 13, Omar said he will help to publicise the plight of the victims.
"We are going to urgently form a disaster committee so that we can see how best we can help to reconstruct the destroyed homes. The victims need urgent assistance because some were left with absolutely nothing.
"More than 200 homes were destroyed and some schools like Petronella Primary had their roofs blown off. We are appealing for any form of assistance from well-wishers," said Omar.
The legislator made some donations to help the victims go by, and encouraged other people to contribute whatever they can towards the alleviation of suffering.
Ward 13 councillor, Takura Mudavose said although the district's Civil Protection Unit (CPU) had donated rice and some tents, much still needed to be done if the victims are to rebuild their lives.
The violent storm, which toppled big trees and damaged infrastructure, also wrought severe damage in wards 8, 9 and 14 in Mwenezi West.
In Ward 8 Chivi South, the violent hailstorm led to the collapse of many houses, with scores of people suffering injuries.local
Share !