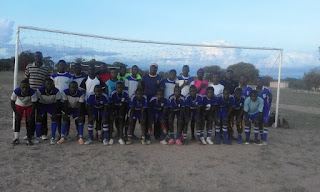 ZAKA – Dewure High school won the Church of Christ Schools competitions held at Matara High School last weekend after beating Mashoko High with a goal to nil in the finals.
Dewure secured a ticket to the finals after beating the hosts by a goal to nil while Mashoko secured theirs after a two nil victory over Chiredzi Christian High.
Matara and Chiredzi Christian Schools took the third and fourth positions respectively.
Masvingo Christian College took the fifth position and won in the girls' handball category while Chizondo and Chiromo took the sixth and seventh position respectively.
Other Christian Schools, Dinhe and Dadaya were absent from the tournament.
The tournament had both indoor and outdoor games including music and drama club, with Masvingo Christian College winning in the drama category.sport
Share !