‘Golf mustn’t just be a game’ 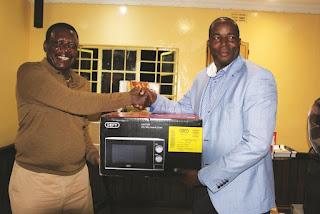 Golf must not be simply a game by which the privileged pass their time, but should be a means of working for the greater good of the community, Masvingo Golf Club captain, Stanley Kondongwe has said.
Kondongwe made the remarks after a prize giving ceremony following the two-day 2018 Sothern Tour golf tournament played at the club.
The tournament, which brought together dozens of golfers from Masvingo and Midlands provinces as well as from Harare, raised over US$8 400 part of which will be donated to charity.
"Playing golf is good, and it's even better when you do it knowing that you are playing to advance a noble cause of charity. I am pleased that we are gathered here today as golfers who acknowledge the importance of giving a hand to those who are less privileged than us," said Kondongwe.
His words echoed those of OK Zimbabwe Chief Executive Officer (CEO) Alex Siyavora who said his company would continue to play a part in the welfare of the poor and vulnerable.
"OK Zimbabwe is proud to be here again in support of this great initiative as we have always done. This is a way of giving back to the community by bringing some activity to the communities that have always supported us in our business," said Siyavora.
OK Zimbabwe were the sponsors of the tournament which also closed with a donation of various foodstuffs and blankets to Ratidzo School which is run by Zimcare Trust.
The tournament was played by more than 60 players over 36 holes, with the game format being medal.
Overall winner was E. Zaranyika, who, playing 21 handicap, achieved a combined net score of 131, followed by C. Ngwenya, 7 handicap, with 136 points. On third position was Siyavora, 21 handicap, with 131 followed by a tally of K. Musiiwa, 23 handicap and B. Chiondegwa, 16 handicap, at position four with 141 points each.
It was, however, Ngwenya who scored the best combined gross of 150; 74 on day one and 76 on day two followed by S. Masiya, 4 handicap, at 160; 80 on day one and another 80 on day two. R. Cummings, 8 handicap, managed 167 combined gross; 83 on day one and 84 on day two.
Zaranyika, alongside Chiondegwa, managed a combined gross 173 each; 91 and 82 for the former, and 85 and 88 for the latter for day one and two respectively.
Other people who made an exceptional mark for themselves include Kondongwe; nearest the pin on hole 3 on day one, J. Musoko; nearest the pin on hole 3 on day two, P. Mudimu; nearest the pin on hole 18 on day one and S. Kasirowore; nearest the pin on hole 18 on day two.
Longest drive on 4 and 14, day one, went to Ngwenya and G. Gwainda respectively, while on 10 and 17, day two, was Cummings.sport
Share !