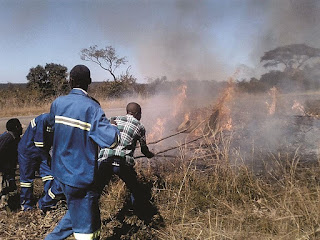 CHIPINGE – The district on June 15 launched the 2018 Manicaland Provincial Fire Season at Mubvangazi Centre in Chipinge rural Ward 6.
The event ran under the theme 'Veld Fires Destroy the Environment, Life and Property - Prevent It.'
The launch was supported by government arms like Forestry Commission, Environment Management Agency (Ema) and Chipinge Rural District Council (RDC) as well as by private entities like Econet Wireless and The Wattle Company.
Chipinge RDC Chief Executive Officer (CEO), Blessing Mamvosha, in a speech read on his behalf by a representative, said he was pleased by the programme as it will contribute to the declining veld fire incident rate.
"Veld fires have declined in Chipinge. Total hectares destroyed by fire dropped from 20 756 in 2009 to 1 251 in 2017," he said.
The Wattle Company managing director, Victoria Jakazi urged commercial plantation owners to keep fireguards.
The Wattle Company provided firefighting equipment and teams that performed fire drills at the launch.
Guest of honour was Econet Manicaland provincial general manager, Parshon Muranganwa who revealed that in 2017, the province recorded a total of 158 fire incidences that resulted in approximately 21 188.73 hectares of land being burnt.
"This was a significant reduction in hectares destroyed by fire. Fires declined by 31 percent from 2016 when 30 850.52 ha were consumed by fire.
"Manicaland is the highest producer of timber in Zimbabwe. The industry contributes significantly to our economy so veld fires mean a loss of timber worthy thousands of dollars," said Muranganwa.local
Share !