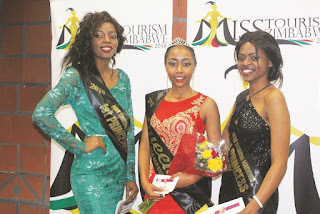 Gamuchirai Jonhera proved with no doubt that she was the right person to be the 2018 Miss Tourism Zimbabwe Masvingo Province after putting up a splendid performance at the modelling contest held at Flamboyant Hotel on Friday, May 25.
Among many other dignitaries and enthusiasts, the contest was graced by Hillthru Enterprises CEO Benjamin Mazarire and his wife who made many contributions to the success of the pageant.
Jonhera, a 21-year-old second year Tourism Management student at the University of Namibia, walked away with US$500 cash prize and a weekend holiday package at Regency Hotel.
Ruvarashe Mukuu and Faith Dube, both from Great Zimbabwe University (GZU), were crowned first and 2nd princesses, getting US$250 and US$150 cash prizes respectively while Blessing Mugabe took the Miss Personality title.
Speaking after her crowning, Jonhera said she looked forward to living up to the expectations that come with her new responsibilities.
"Miss Tourism Zimbabwe Masvingo 2018 was my biggest pageant and I had a great experience throughout the whole process. I learnt a lot as well. Competition from my rivals was very stiff but I am glad I managed to come out on top. I would like to thank the Miss Tourism Zimbabwe organisers for the great experience," said Jonhera.
Regional license holder for Miss Tourism Zimbabwe, Innocent Munaye thanked the sponsors who made the show possible.
He also thanked such executive committee members as Lorraine Muguti, Moreblessing Magutso,  Memory Munaye and Bhebhe Mangwanya and Heather Masimba for helping him plan the show.
All models said they were happy to take part in the contest, with those who lost saying they were humbled by the opportunity to get some exposure.
They said they will forever be grateful to be afforded an opportunity to take part in a contest which has the interest of so many people in the whole country.entertainment