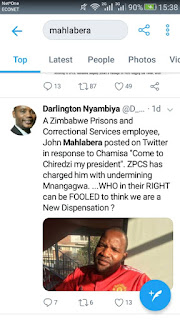 A Zimbabwe Prisons and Correctional Service (ZPCS) officer at Chiredzi Prison, John Mahlabera, is set to appear before a disciplinary hearing on June 12 charged with undermining President Emmerson Mnangagwa by allegedly posting a Twitter message which supposedly referred to opposition leader, Nelson Chamisa as 'my president'.
He will be charged with contravening Section 3(1) of the Prison (Staff) (Discipline) Regulations of 1984.
According to ZPCS, Mahlabera allegedly posted a message on micro blogging site Twitter account, which reads; 'Come to Chiredzi my president' in response to Chamisa's rally in Zaka.
ZPCS says Mahlabera's statement showed disrespect for Mnangagwa, saying the prison officer had no right to act in the manner he did.
The Zimbabwe Lawyers for Human Rights (ZLHR) has expressed outrage, saying the move marked 'a fresh clampdown on dissent'. The legal rights group has also instructed its members; Collen Maboke and Blessing Nyamaropa to represent Mahlabera.
Maboke and Nyamaropa said they believe Mahlabera's was within his rights to express himself freely as guaranteed in Section 261 of the country's constitution.
They also argue that the statement itself is ambiguous as Mahlabera did not explain whom he was referring to by 'president'. They further argue that there is no verification that the account really belongs to Mahlabera and he is the one who made the post.
Other concerned citizens have also taken to Twitter castigating Mnangagwa's government for adopting the same tactics used by former president Robert Mugabe.
ZLHR's records compiled since 2010 has shown that the organisation has attended close to 200 cases where people have been arrested and charged for allegedly 'insulting or undermining the authority of the President'.politics