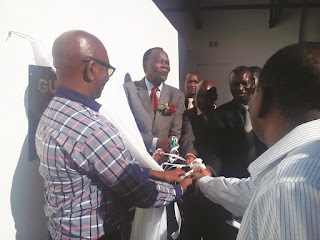 CHIREDZI - Chiredzi Rural District Council (RDC) has adopted a Public Private Community Partnerships (PPCPs) in its quest to attain sustainable goals of reducing poverty, hunger and improving water and sanitation in line with the Sustainable Development Goals (SDGs).
The motto was 'No one should be left behind' as the partnership with Tongaat Hulett Zimbabwe celebrated the commissioning of the Gudo Community Clinic last week.
The project is one of a number of initiatives that has brought together communities, the local authority and the private sector.
Tongaat Hulett handed over the Gudo Community Clinic to the council after the company took over construction when it had reached window level.
The sugar producer took over at a time when the local authority expected donor funding which had, however, failed to materialise since 2004.
Chiredzi RDC Chief Executive Officer (CEO) Isaac Matsilele who was represented by Mikia Majatame said the plans for the project were done over 10 years ago.
"Indeed, the construction of Gudo Clinic has come far. The plan was made back in 2004, with promise of donor funding.
"This did not materialise until Tongaat Hulett came and took over construction. Chiredzi RDC constructed staff houses, with help from the Community Share Ownership Trust," he said.
The sugar company contributed US$43 250.88, Chiredzi RDC contributed US$29 786 while some US$564 came from the Community Share Ownership Trust.
Tongaat Hulett managing director, Sydney Mutsambiwa said the company was committed to the development of the southern region of the country.
"Tongaat Hulett's operations; Triangle and Hippo Valley Estates, have been on a drive to facilitate the development of the south eastern region. Our key areas of focus for socio-economic development are health (water and sanitation), education and infrastructure," said Mutsambiwa.
"The contribution to the Gudo community through the completion of the clinic comes at the back of a donation made to capacitate Chiredzi Hospital in 2013. Some 158 beds were donated by the company, some wards were painted and a donation of 10 thousand litre water tanks valued at US$60 000 was made," he added.health
Share !