Under fire prison officer gets reprieve 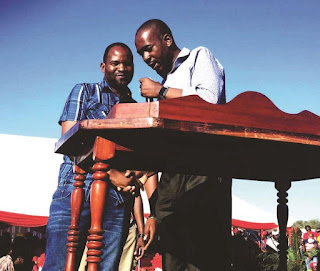 …as Chamisa promises him promotion if MDC Alliance wins

CHIREDZI - MDC Alliance presidential candidate, Nelson Chamisa last week praised the Zimbabwe Prisons and Correctional Services (ZPCS) officer, John Mahlabera, stationed at Buffalo Range Prison, who is in trouble at work for social media comments interpreted as supporting the youthful opposition leader.
Mahlabera is set to appear before a disciplinary hearing for undermining President Emmerson Mnangagwa after posting a message on his Twitter account begging Chamisa to come address a rally in Chiredzi.
"Come to Chiredzi my President", Mahlabera allegedly tweeted in response to Chamisa's rally at Jerera growth point earlier on.
Addressing thousands of party supporters who thronged the Tshovane Stadium in Chiredzi over the weekend, Chamisa said as President, he would make sure that Mahlabera gets his job back if he wants it, with the possibility of getting a promotion.
Chamisa also gave Mahlabera an immediate option of joining his security team if interested in the job.
"I heard there is a prison officer who got into trouble for saying Chamisa should come to Chiredzi. The job he was fired from will be his again from August 1 with the possibility of promotion.
"Things change and if Mahlabera chooses not to take his job and walk with the president, it's all up to him.
"From today onwards, I will be working with Mahlabera by my side till elections. It is also up to him to continue working with me after the elections or return back to his job after we take over the government," said Chamisa.local
Share !