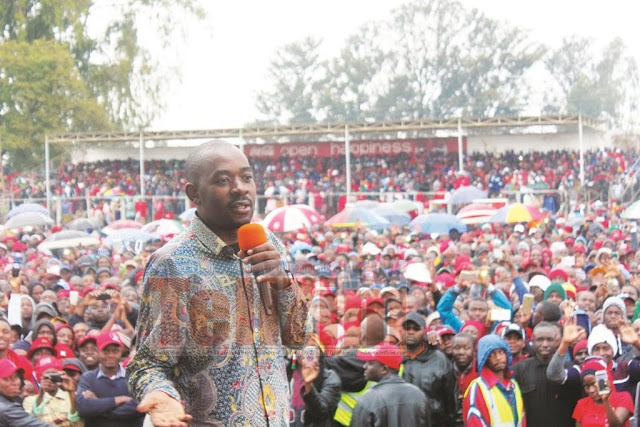 …'ED, Bob have no place in new dispensation'

MDC Alliance presidential candidate Nelson Chamisa has made it clear that he will not work with former president Robert Mugabe because he, just like President Emmerson Mnangagwa, represents the old order which every Zimbabwean wants to get rid of.
Speculations were rife that Chamisa and Mugabe were working together from behind the scenes, with the former president said to be bankrolling the young opposition leader.
Mugabe is said to have demanded that Chamisa gives his wife Grace the vice presidency if he wins the upcoming elections.
A cabinet list, supposedly agreed to by Chamisa and Mugabe, did some rounds on various social media platforms but was later rubbished as fake by the MDC Alliance
Addressing tens of thousands of MDC Alliance supporters who braved the rains and cold weather at Mucheke Stadium last Sunday, Chamisa claimed that he had now secured Mugabe's vote but made it clear that he will not work with him in any way.
"Ikezvino mudhara wangu Mugabe akanditaurira kuti vaChamisa ini ndinotenda kwamuri ndikati inini handisarudzi vote (Mugabe told me that he believes in me and I said to him that I don't choose votes).
"Vote haina zera. Kana Mugabe uchida,  ndivhotere hako ndokutenda nevote yako but we want a new dispensation, a fresh start, fresh policies dzakuratidza kuti it's a departure from the dispensation yakudhara yaMnangagwa nanaMugabe because we are now facing forward.
"Whereas Mugabe was the leader of the first republic with a liberation promise, I am the leader of the second republic with a transformation promise," said Chamisa amid thunderous applaud from the crowd.
Chamisa also took time to castigate the Zimbabwe Electoral Commission (ZEC) for choosing to side with Zanu PF when they should play neutral.
"What stands between us and the promised land is ZEC. What stands between us and a prosperous economy is ZEC. ZEC has become bed mates with Zanu PF. We have realised that ZEC is biased.
"They are choosing to throw away the whistle and join another team. We will not be rigged this time around," said Chamisa.
He said the MDC Alliance will not boycott elections because they were the winners come July 30 harmonised elections.
"We have said we will not boycott elections. Winners cannot quit. Munhu angatoti eke ndiMnangagwa nekuti yakamukakira ndima iyi (Instead, it is Mngangwa who must quit). We are going into an election but we are going on two conditions.
"We do not want a ghost ballot. We want a ballot which we can all agree on. ZEC is joking in saying they have already finished printing the ballot. We have said to hell with that. We are going to have a proper ballot paper in this election," said Chamisa.top news
Share !