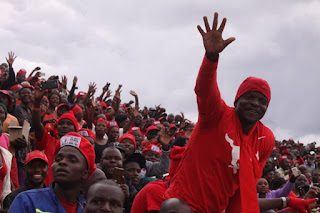 MDC Alliance leader, Nelson Chamisa's final tour of Manicaland in preparation for the elections has left an impressive mark on the people who look up to the youthful opposition politician as only one capable of redeeming their hopes for change.
Accompanying Chamisa were top alliance officials like Happyson Chidziva, Douglas Mwonzora, Tendai Biti, MDC-T Manicaland provincial chairperson; David Chimhini and national women' assembly leader; Lynnette Karenyi.
The campaign began in Chipinge; Gaza Stadium and proceeded to Chimanimani West; Nedziwe business centre where Chamisa showered the alliance's parliamentary candidate for the constituency, Cannan Matiashe, with praise.
He also commissioned a full- equipped ambulance donated to the constituency by Matiashe.
"As Zanu PF continues to buy its own vehicles using State funds, few individuals like Matiashe have a heart for the people. The new government is going to bring new things as expected by the people of Zimbabwe," Chamisa said.
Matiashe told the crowd some Zanu PF youths were moving around singing threateningly; indicating that the horrors of political violence of the past would return if the ruling party is defeated.
On July 13, the MDC Alliance team went to Mutasa Central and Mutasa East where the message of electoral victory was repeated.
While addressing the gathering, Karenyi said even though Zanu PF was employing every trick in the book, people were no longer afraid, as evidenced by the huge turnout at each of the alliance's rallies.
In his own address, Mwonzora said Zanu PF was always trying to sabotage the MDC Alliance campaign by distributing agricultural inputs wherever they organised rallies.
At the Sakubva Stadium star rally in Mutare on July, 14 the turnout was massive, with the venue filled-up by excited supporters.
It was in Sakubva Stadium that Chamisa repeated his pledge to be a responsible leader and not to be a power-crazed ruler like deposed former president, Robert Mugabe.
He also repeated his wish to rename the country to Great Zimbabwe as well as rename the provinces so that they no longer carried any ethnic connotations.
He attacked the Zimbabwe Electoral Commission (Zec) for what he called was blatant bias and mismanagement of the country's electoral process.
"Zec is helping Zanu PF to rig the elections, but we will not allow that. We are going to defend our vote," Chamisa said.
Chamisa closed his Manicaland tour with a massive rally at Vengere Stadium in Rusape on July 24, where he pronounced his support for MDC Alliance Makoni Central parliamentary candidate, David Tekeshe.
"Following a meeting between Zec and political parties, Zec has maintained its course of refusing to be transparent," Chamisa said.
Chamisa closed his last leg of the Manicaland campaign with a prayer; asking for divine intervention to ensure free, fair, credible and non-violent elections.top news
Share !