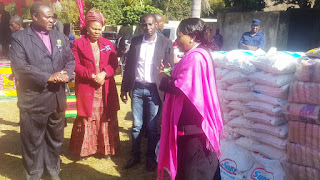 First Lady during his visit to Mt Selinda

CHIPINGE - First Lady Auxilia Mnangagwa last week poured her heart out to the Chipinge community and pleaded with them to look after their children and desist from the norm of dumbing their little children at the Daisy Dube Orphanage housed at Mt Selinda Mission Hospital.
There has been many reported cases of mothers in Chipinge who dumb their babies at the Mt Selinda Mission hospital entrance and disappear without a trace.
The Daisy Dube orphanage would then take in the children and raise them.
"We have heard from the authorities that some of the children catered for here were baby dumped at the hospital entrance. Why would a mother who carried a child in her womb for nine months end up doing such a thing?
"I appeal to the people of Chipinge to stop baby dumping. Families should cater for their relatives. Sending children into orphanages should not be fashion. That should be a last resort," said the First Lady.
The First Lady, who has been doing national tours carrying out her cancer screening awareness programme, said she would push for Mt Selinda hospital to have a well-equipped cancer screening unit.
"I am concerned about the issue of cancer screening here. Women cannot get screened for cancer because of inadequate facilities. Something should be done to avoid our mothers from dying of cancer," she said.
The First Lady, who was in the company of the minister of State for Manicaland Provincial Affairs Monica Mutsvangwa and Manicaland Provincial Administrator (PA) Edgars Seenza, donated foodstuffs and blankets towards the Daisy Dube orphanage.
Mt Selinda Mission Hospital was established in 1893 by the United Church of Christ in Zimbabwe (UCCZ).local