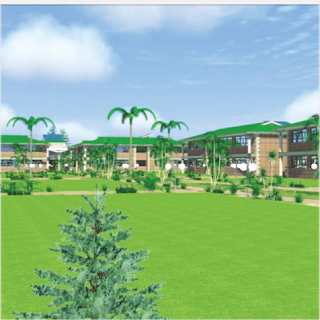 An artist's impression of UOL

CHIREDZI – Construction of the proposed University of the Lowveld (UOL) is expected to begin after the July 30 elections, with Chiredzi Rural District Council (RDC) and the Chiredzi Town Council having now allocated 127 hectares more land in addition to the 123 hectares al-ready set aside for the purpose.
In a letter of confirmation to the university board chairperson jointly written by the RDC and town council, dated June 25, 2018, the two authorities confirm allocation of the land.
"Chiredzi RDC and Chiredzi Town Council jointly acknowledge receipt of your request for the allocation of additional 127ha of land for the setting up of a University within the remainder of Buffalo Range.
"The two planning authorities kindly advises your office that they have no objection in allocat-ing you the requested additional land in question but subject to the release of the land by Ministry of Lands, Agriculture and Rural resettlement," reads part of the letter.
UOL managing director, Absalom Chikoto said the project was initially allocated 123ha of land which he said was not sufficient.
"We were at first given 123ha yet a campus should have a minimum of 300ha. The remaining 50ha will be allocated soon and we will begin construction soon after elections," said Chikoto.
The UOL project is a brainchild of the Conservation Trust, with funding for construction raised through a build, operate and transfer agreement signed through several local banks.
The university is expected to start with seven faculties namely; medicine, humanities and educa-tion, culture and heritage, science, engineering and technology, natural resources and ecological sciences.education
Share !