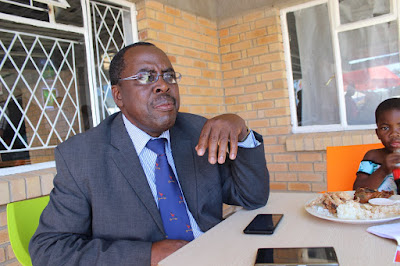 Mudzikisi says his people will vote for Mnangagwa

Masvingo North's independent candidate, Pascal Mudzikisi is mobilising people to vote for President Emmerson Mnangagwa as their presidential candidate.
Mudzikisi, a businessman and chattered accountant, was not given a chance to contest during the chaotic Zanu PF primary elections with claims suggesting that his CV was thrown out by his bitter rival and Zanu PF's Masvingo North candidate Davison Marapira.
Mudzikisi claims that Marapira engineered his premature exclusion from the Zanu PF primaries and he decided to file as an independent candidate.
Addressing his rally at Maraire Shopping Centre in Zimuto, Mudzikisi narrated how he has been cheated and elbowed out of the race and claimed that Zanu PF has once again been hijacked by novices.
"I am not an independent by choice but because you the people pushed me. Your support for me has been overwhelming and I did not want to disappoint you.
"There are people who are privatising Zanu PF and elbowing out genuine members because of their greed and we say no to that. We will fight for what is rightfully ours and we will win.
"Yes I am an independent but that does not matter because I still believe in my President Mnangagwa. He is our candidate and we are going to vote for him," said Mudzikisi amid wild cheers from hundreds of his supporters wearing Zanu PF regalia.
Mudzikisi said it is time that the people of Masvingo North voted for one of their own to see meaningful development not what has been done over the past years by Marapira.
"Marapira is not our own. He is from Zaka and we want to send him packing. He is so arrogant and is impossible to talk to. He is too smart and thinks of himself as more superior than the people who voted him into office.
"Masvingo North will never be a colony of Zaka. I joined this party long back when it was still Zanu so these novices who think they have the power to personalise the party will get burnt," said Mudzikisi.
He claimed that Marapira was sending spies to his rallies and intimidating people from coming but that would not deter him.
There was a black Ford Ranger parked at Mudzikisi rally which was said to have been send by Marapira to on a reconnaissance mission.
"He sends his people to intimidate us but gone are the days. This is the new dispensation and we will not be intimidated.
"We are going to run vibrant projects and our people are going to be empowered," said Mudzikisi.
Marapira, however, rubbished Mudzikisi claims saying he is a bitter man waiting for a rude awakening come July 30.
"I did not throw Mudzikisi's CV out. I don't have a reason to do that because to me he is a nonentity and far from offering a real challenge.
"He is seeing ghosts of me wherever he goes and that is called fear. The people of Masvingo North are not stupid and will not be sold a dummy. People want tangible development and not someone who just talks and cannot walk the talk. I will not insult him and the people will speak come July 30. My work on the ground will speak for me.
"I have no reason to spy on him and I don't even know the car he wants to give to me. My cars are orange so he has to point fingers elsewhere. I believe in peaceful campaigns and no one will be forced to do what they do not like," said Marapira.
A total of eight candidates are running for the Masvingo North seat but the real contest seems to be between Zanu PF's Marapira, MDC Alliance's Progress Masocha and Mudzikisi.politics
Share !