Thousands attend ‘Go Out and Vote’ campaigns in Zaka, Checheche 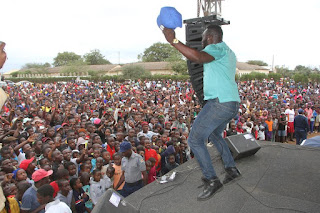 Shinsoman entertains the crowd during the 'Go Out and Vote' campaign


TellZim Reporter
CHIPINGE - Thousands of prospective voters attended the Go Out and Vote campaign concerts which were held at Jerera growth point in Zaka and Checheche business centre in Manicaland last Friday and Saturday respectively.
The concerts attracted more than 15 000 people while over 7 000 also watched the programmes from the Tell Zimbabwe News Live Streaming platform.
The concerts were organised by a consortium of Non-Governmental Organisations (NGOs) among them Cotrad, Heal Zimbabwe, Centre for Gender and Community Development in Zimbabwe (CGCDZ) and Platform for Youth Development (PYD).
The events saw musicians Tocky Vibes, Jah Signal, Lady Squanda and Shinsoman entertaining the crowds.
At Jerera growth point David 'Vharazipi' Mubaiwa gave an outstanding comical performance urging people to freely and peacefully exercise their rights to vote.
Speaker after speaker encouraged people to go out and vote in their numbers, and more importantly, to vote in peace.
At Jerera, acting Chief Nyakunhuwa told the gathering that chiefs in Zaka will not tolerate any form of political violence saying the electorate should exercise tolerance.
"On behalf of other chiefs in Zaka, I want to applaud the organisers of this event; we want peaceful elections. We do not want to hear any case of political violence here in Zaka; political parties should exercise tolerance," said Chief Nyakunhuwa.
Some candidates from all political parties vying for national assembly and local government seats respectively also signed peace pledges during the concerts, committing themselves to ensuring that people vote in peace.
Tocky Vibes and Jah Signal kept the crowd on its toes at Jerera while Shinsoman was at his best at Checheche. Lady Squanda did not disappoint also as she left the crowd yearning for more.
All the musicians encouraged people to go out in their numbers on July 30 and cast their vote.
PYD coordinator, Claris Madhuku thanked the people of Checheche among them traditional leaders who came in their numbers for the concert.
"Thank you for coming; let us spread the message and encourage those who registered to vote to go out and vote on July 30. I also want to thank the traditional leaders who are here – may you encourage the electorate to go and vote peacefully," said Madhuku.top news
Share !