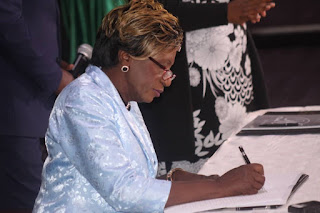 HARARE - The National Peace and Reconciliation Commission (NPRC) last week hosted a peace pledge signing ceremony for the 23 candidates contesting in the presidential elections scheduled for July 30.
Held at the Harare International Conference Centre in Harare, the ceremony sought to engender a culture of peace and tolerance in the run-up to the election.
Zanu PF candidate; President Emmerson Mnangagwa, was represented by Obert Mpofu while Morgan Komichi stood in for MDC Alliance candidate, Nelson Chamisa. Obert Gutu came representing MDC-T leader and presidential candidate, Thokozani Khuphe.
United Democratic Movement (UDM) leader and presidential candidate, Violet Mariyacha signed the peace pledge and called for peace and greater tolerance in the campaign.
Coalition of Democrats (CODE) president, Elton Mangona said the responsibility for peace and tolerance rested largely on the State which has always been the perpetrator of violence against the opposition.
"Yes, we can sign this pledge but amongst us, only the State was responsible for violence and intimidation especially during previous elections. I am a victim of State-sponsored violence myself," said Mangoma.
Komichi said violence must be seen as transcending physical violence, with psychological trauma and hunger being other forms of violence.
"The term peace is not the absence of war ladies and gentlemen. Violence goes beyond what is generally known to include the infliction of trauma and hunger as means to a political end.
"We want Zimbabwe to be free and peaceful, everyone being able to exercise his or her constitutional right without fear or favour. The deployment of military personal in rural areas is a way of instilling fear into people and that should stop.
"The State has been the number one perpetrator of violence in previous elections. I am reflecting on the kind of torture and suffering we went through together with other party members including the late founder of the MDC, Morgan Tsvangirai," Komichi said.
Mpofu refused to answer to allegations levelled against Zanu PF and the State, choosing only to say old wounds should be allowed to heal.
"I wouldn't want to respond much to what opposition political parties have said against the State or my party but the healing process needs not open closed wounds as some of us were there during Gukurahundi and we saw what was happening and we wouldn't want to open that bag," Mpofu said.politics