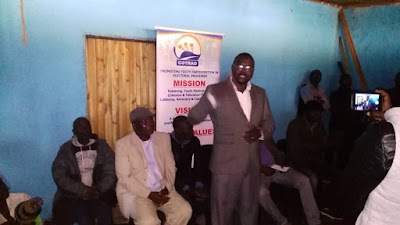 The people in Zaka Central constituency have said they are going to vote for leaders who are capable of spearheading development in their area.
At a public discussion meeting organised by Cotrad at Four Miles (Four Maira) in Ward 8 of Zaka Central last Wednesday, speaker after speaker pleaded with aspiring candidates to depart from the traditional culture of only humbling themselves during campaigns only to turn into demigods soon after being elected into office.
The villagers who attended the meeting said it was frustrating that politicians often took the people for a ride.
"We have politicians who believe that people in rural areas are fools and they come here and slaughter cattle for us to eat towards elections but then dump us soon after elections…that must stop," said one participant during question and answer.
MDC Alliance candidate for Zaka Central constituency, Lovemore Chinoputsa said he did not have personal funds to donate for developmental projects but promised that once elected into office, he would work with the community to spearhead development.
"Where do you think I should get the money from in this country at the moment? I live an honest life and I am not a thief so I don't have dirty money to buy votes. All I can promise is that I am educated enough to help the people in my home area to promote development. I will be with you all the time. You will give me ideas, and I will run around looking for people to help us implement the projects," said Chinoputsa.
Zanu PF candidate for the same constituency, Davison Svuure did not turn up for the event amid rumours that he cannot face the people who have doubted his claims that he is a qualified engineer.
Local government candidates from MDC Alliance and Zanu PF as well as an independent attended the meeting.
Villagers thanked Cotrad for coming up with the platform which they said had allowed them to interact with aspiring candidates.politics
Share !