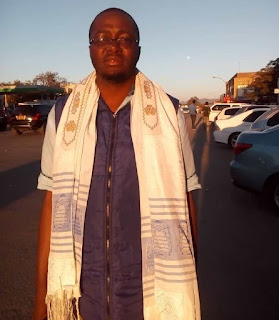 
Bothwell Chabarika
The Zimbabwe Partnership for Prosperity (ZIPP) leader, Dr Blessing Kasiyamhuru has made an appeal to Masvingo residents to vote for him in the forthcoming July 30 harmonised elections.
Kasiyamhuru said this after he met with TellZim News reporters in the CBD on Thursday July 26, 2018 when he was touring the city, as part of his campaign.
The ZIPP president promised a number of positive change to the country if people voted for him, pledging to bring development to Masvingo by recognising the city as a tourism hub.
He also promised to prioritise the upgrading of the Beitbridge-Chirundu highway, saying Masvingo deserved better than it was currently getting.
"We want to build a Zimbabwe that will be in a position to export rather than to import and we are looking forward to make Masvingo a tourism hub that will be a centre of attraction to people from various areas of the world. We are looking forward to reducing traffic jams in Masvingo by creating better road networks. Masvingo is a special city," said Kasiyamhuru.
The youthful politician promised to put to an end all problems that Zimbabweans are facing at the moment. He mentioned the issue of the economy and the joblessness that he said will be put to an end once he got elected as president.
The 45-year-old opposition leader said he acknowledged the contribution of the older generation in gaining the country independence from white minority colonial rule, but pointed out that the future was now more important than the past.
Kasiyamhuru told TellZim News that he regarded Masvingo as his home since he attended school at Gokomere CPS and secondary schools.top news