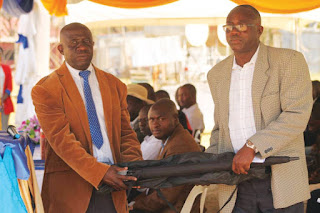 ZVISHAVANE - A farewell party for outgoing Zimbabwe Republic Police (ZRP) officer commanding Zvishavane - Mberengwa policing district, Chief Superintendent Edward Ncube was last week Friday held in honour of the senior officer who has been transferred to Plumtree.
After in the Zvishavane - Mberengwa district for three years, Ncube has now been moved and has been succeeded by Albert Ncube from Gokwe.
Speaking at the farewell party, Ncube said he enjoyed his stay in Zvishavane though it was not all rosy in the course of duty.
"In the year 2015 we recorded 17 percent reduction in crime, in 2016 a 10 percent reduction and in 2017, we recorded a reduction of 9 percent," he said.
Local traditional leaders; chiefs Mafala, Masunda and Ngungumbani were present at the party as well as new Members of Parliament (MPs) for Zvishavane-Runde and Zvishavane-Ngezi constituencies Cuthbert  Mpame and Dumizeni Mahwite respectively.
On behalf of all chiefs in Zvishavane district, Chief Ngungumbani praised Ncube for reducing the so called 'mabhemba' crimes; bloody machete feuds among artisanal gold miners over mining space and lucrative gold claims.
"You have been doing good Ncube, we praise you for that. There have been cases of mabhemba but I want to thank you that such cases have now dropped," said Chief Ngungumbani.
Other speakers also praised Ncube for what they said was his proven track record as a capable leader in crime fighting efforts, adding they hoped his replacement will be equally good and will be able to effectively carry forward the work that Ncube had put in motion to make the district safer.
Speaking to TellZim News later on, Mimosa Mine managing director, Peter Mutombeni also praised Ncube for working well with the mining sector and striving for the security of all businesses.
"We have worked well with him all this time and we will always remember his enormous contributions to the safety and security of our communities and our businesses. We wish him greater success at his next station," said Muthombeni.top news