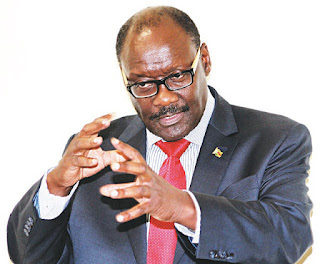 GWERU - The Minister of Health and Child Care, Dr David Parirenyatwa has warned that the local municipal water is not safe for human consumption following a typhoid outbreak which killed some people in Mkoba and left many other hospitalised as of last week.
Speaking at an emergency meeting in the city, Parirenyatwa said people should be given water treatment pills to help curb the spread of the disease.
"People should be given pills to treat water and council should also provide water in bowsers so as to help curb the spread of the disease since Gweru water is not safe for consumption.
"A taskforce must be formed to meet daily to continue assessing the situation and the team should be led by the provincial medical director. Awareness campaigns should also be conducted with the help of NGOs for the people to know more about the disease," said Parirenyatwa, who also called for exploration of other ways of fighting the disease.
He said it was the first time that Gweru had experienced a typhoid outbreak and urged members of the public to dispose of litter properly.
"We must also constantly check the water that we drink because sometimes pipes do burst and the water gets contaminated and some of the taps may be rusty. So we need to go to the root of the problem and work together to find a solution," he said.
Before Parirenyatwa's comments, Gweru City Council had blamed borehole and untreated water sources for the outbreak of the disease while maintaining that municipal water was safe to drink.
The Minister of State for Midlands Provincial Affairs, Owen Ncube thanked the Ministry of Health for responding swiftly to the crisis and recommended that the council meet the cost of funerals for those who died of the disease.local
Share !