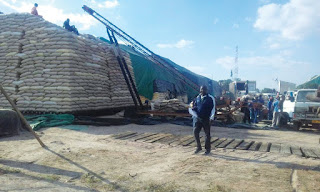 ZAKA – Farmers in the district are struggling to deliver their produce to the Jerera GMB depot amid reports that the management is asking for bribes from them.
Truck drivers and farmers who do not immediately pay bribes are said to be spending three to five days at the depot.
The gate, which is opposite Mushangwe Bottle Store, is reportedly opened only to those who would have paid the required bribes.
When contacted for comment, Jerera depot manager only identified as Shumba said he was not authorised to speak to the media and refered all questions to GMB head office.
"I'm not allowed to speak to the media, if you need anything contact our head office and speak to the public relations department," said Shumba.
Farmers told TellZim News that some trucks would come and get in using the back entrance, offload their cargo and leave behind those that would have arrived much earlier.
"I have spent three days here without being served. Together with others, we have hired a truck to deliver our grain and the owners of the truck are charging us per each day we spend here," said a farmer.
Another farmer said some unscrupulous truck drivers, working in cahoots with the depot management, were now exploiting the chaos to jump the queues using all sorts of funny explanations.
"Some of the drivers simply come and say they are carrying food aid from the Department of Social Welfare. They then jump the queues saying they cannot be expected to wait since they ostensibly would be in a hurry to deliver some of the grain to food aid recipients. It's surprising though that most of them would offload all the grain here and leave. The management does not come out to tell us what is going on inside," said another farmer.
Another farmer said she was pained that standards were not being enforced fairly, with some good grain being rejected for spurious reasons.
"They can tell you that your grain has too much moisture or that it's too small, but go on to approve similar grain from someone else. There is too much corruption going on here," said the farmer.agriculture