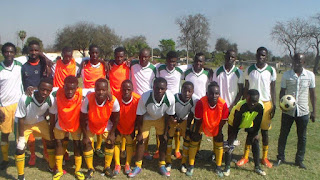 Zifa Eastern Region Division 2 side, Chiredzi Stars FC recently romped to an emphatic 5-0 victory over Young Stars last week as they edged closer to promotion into the division 1 league.
Stars have accumulated 20 points so far and are gallantly shaking off a strong challenge from second-placed Eland FC who will play other top contenders, Koala FC this Saturday.
Chiredzi Stars FC, who are being sponsored by South Africa-based philanthropist Patrick Madzima, have only four games remaining and they are optimistic about qualifying into the division 1 battlefield.
The team's administration is empowering the youth by recruiting less-privileged but talented high school children into the club. They also cater for the young players' school fees while some of them are given life-time opportunities to get driver's licences and passports.
The team's administrator, Taurai Dzoro said they were working hard to qualify for promotion to division 1 next season so that they can go to the next stage of developing new soccer talent in Chiredzi.
"As for now, we are focusing on winning the league then go for playoffs to qualify for division 1. Basically, we are physically and mentally conditioning the players for the tough assignments that lie ahead. Professionalism is our catch phrase from the administration and technical team right down to the players," Dzoro said.
The club has a professional setup with one of Chiredzi's yesteryear stars, Tawanda 'Ngolozi' Chibaira as the secretary general and Kuda Machera as technical director.
Club captain, Victor Machote, who plays goalie, is one of the consistent players but the club is also scouting for seasoned players to beef up the team.
Chiredzi Stars are hoping that someday, they will follow in the footsteps of Triangle FC who have held their fort in the Castle Lager Premier Soccer League (PSL).sport