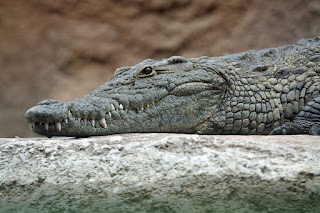 MWENEZI - A form two pupil at Masuture Secondary School was last Thursday left nursing serious injuries after being mauled on the leg by a crocodile while fetching water in Mwenezi River.
Christopher Ziraba, was rescued from the crocodile's jaws by a passer-by but the reptile had already broken his leg.
Masuture Secondary School headmaster, Morgan Mbulawa confirmed having received the report, adding that the boy was recuperating in Triangle where he is receiving treatment.
"I have heard through his parents that the boy was attacked by a crocodile on his leg. He had been plastered and is currently admitted in Triangle where his father works," said Mbulawa.
An eyewitness also confirmed that after attacking the boy, the reptile dragged him for some metres in water and a daring passer-by rushed to the boy's recue after realising that the crocodile was about to disappear with the boy.
"Had it not been the bravery of a passer-by, the boy could have been devoured by the crocodile. The passer-by wrestled the crocodile for a while and the boy was freed but the damage had already been done.
"The boy lost a big chunk of flesh from his leg," said an eyewitness.
Attacks by crocodiles have become a persistent menace especially to school children who regularly cross Mwenezi River to attend Masuture Secondary and Mwenezi Primary School.
End of last year, Energy Sinina, a pupil who was then doing grade seven at Mwenezi Primary School wrote his final grade seven exams on a Neshuro District Hospital bed, nursing a broken leg and some injuries after he was attacked by a crocodile while crossing Mwenezi River on his way home from school.local
Share !