Home » Business » Get over it, the two percent tax is right: Murwira

Get over it, the two percent tax is right: Murwira 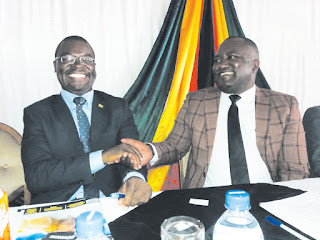 Prof Amon Murwira and Minister Ezra Chadzamira at the event

The Minister of Higher and Tertiary Education, Professor Amon Murwira has endorsed the controversial two percent tax per every electronically-transacted dollar as recently pronounced by his Finance counterpart Professor Mthuli Ncube, likening the country’s dire economic situation to a canoe that everybody had to paddle.
Speaking at a local business forum held in Masvingo on Monday, Murwira said the country was in a serious crisis, adding it would take a collective approach to resuscitate it back to its glory days.
“Zimbabwe is like a canoe and everyone should paddle so that we stay afloat. We cannot sink because of one person (who does not want to pay the tax) and we each have to play our part.
“The country is a helpless being and if you sleep it also sleeps. The reason why many people cried because of the two percent tax is because they have not been contributing towards nation-building.
“We need all hands on deck and the two percent tax is part of the measures to make this country get back onto its feet. You cannot demand good services when you are not paying,” said Murwira.
Murwira said tax should not be an issue of debate as is being done in the country saying other countries world over were doing it.
“In countries like Germany, failing to pay tax is a serious crime which can get you locked up for a long time. Many people have not been paying their taxes and there is no room for that in the new dispensation,” said Murwira.
He challenged the business community to be export-oriented so that they could bring in the much-needed foreign currency since the Reserve Bank of Zimbabwe (RBZ) was literally empty.
“The RBZ is empty and you find people queuing for forex which they did not deposit. Where do you expect the bank to get the forex from if you are not bringing it in?
“We need businesses to be export-oriented and target those outside markets. We do not want the situation where people get into the business of selling money like what we are experiencing across the country,” said Murwira.
The controversial two percent tax has drawn scorn from various sectors of the economy even within the ruling party where Ncube is accused of not consulting.
Main opposition MDC Alliance leader, Nelson Chamisa has come out guns blazing saying the tax was not only illegal but pure daylight robbery.
Share !