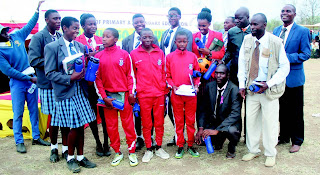 The Pamushana team pases for a picture at the awards ceremony

Pamushana High School last week dominated the Sports category of the FBC Bank Masvingo Provincial Merit Awards ceremony held at Rutenga Primary School in Mwenezi.
Pamushana won in the under 17 Stella Netball, under 20 National Association for Secondary School Heads (NASH) football and under 15 boys Copa Coca Cola football categories.
The school’s football coaches Simbarashe Mlambo and Bernard Matenga were named best coaches in the under 20 and 15 boys football categories respectively.
In athletics, Pamushana High School scooped six awards, with one pupil Mary Mashoko being honoured for winning a gold medal in the 4x100m in the under 16 girls category while Kuzivakwashe Mugwazi won an award in the under 16 boys category of the same discipline.
Claris Kwaramba won in the under 21 girls in 100 and 200m category and medley.
Pamushana ‘O’ level teachers also won Best Teacher awards in Woodwork where 21As and 4Bs were produced, Agriculture with 42As, Commerce with 60As, 40Bs and 10Cs as well as in Principles of Accounts with 30As, 27Bs and 28Cs.
‘A’ level teachers were aslo named best teachers in Divinity with 12As, 16Bs and 1c; Economics with 7As, 20Bs and 7Cs; Mathematics with 49As, 4Bs and 3Cs; History with 21As and 2Bs as well as in Accounting with 15As, 6Bs and 5Cs.