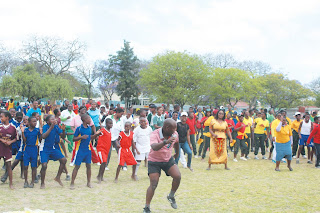 Matenda makes a demonstration in front of pupils and teachers

Zimbabwe national football team fitness trainer, Thompson Matenda recently partnered with the Ministry of Primary and Secondary Education for a two-day fitness boot-camp at Victoria Junior School.
The camp saw various schools from in and around Masvingo engage in thrilling competitions in aerobics, tug of war, sack race and other disciplines.
In the primary schools category, Shakashe emerged victorious with 58 points out of a possible 70, followed by Dikwindi and Chikato who finished second and third respectively.
Other schools that participated in the category were the hosts Victoria Jnr, Helen McGhie, Francis Aphiri, Madyangove and Runyararo.
In the secondary school category, Rufaro, Gutu and St Anthony took first, second and third prizes respectively while Silveira, Gokomere, Zimuto, Serima, Vision Academy and Masvingo Christian College occupied the 5th-9th positions respectively.
Winners from both categories walked away with floating trophies, gold medals and T-Shirts while second and third-placed teams took home silver and bronze medals.
Speaking to TellZim News on the sidelines of the event, Matenda promised to do more and spread the competitions to other areas.
"I feel obliged to take this exercise to everyone including school children so that we can have a physically fit generation. We definitely are going to spread our wings to all towns and try to reach everyone," said Matenda.
Provincial Schools Inspector (PSI) Physical Education and Culture, Fredrick Matavikwa said he was pleased with the programme.
"This camp aimed to give physical education teachers some vital exposure on the type of drills and workouts expected from them and also to discourage learners from sedentary lifestyles," said Matavikwa.
Share !