Women need to be proactive with their health, Zvishavane Lion's Club says 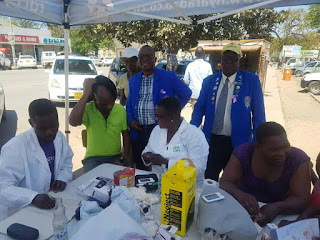 …many dying of cancer, diabetes due to lack of information

ZVISHAVANE - Several members of the Lions Club on October 20 stationed themselves at Pote Central open ground to educate people on how to fight the spread of cervical and breast cancers.
They shared information with members of the public on the need for constant screening and blood tests for early detection of such medical conditions as diabetes.
Lions Club president, Chengetai Phiri told TellZim News that he had observed that a number of people did not know their diabetes status as they gave little regard to that.
"We are doing this diabetes testing for free and women are being given information on some types of cancer which have claimed many lives. We have realised that people in urban areas rarely visit the hospital for such services as they are always busy with other things," he said.
One of the beneficiary of the outreach programme was Lisa Mabena who thanked the club for helping her understand the importance of being pro-active with the health of her body.
"I wasn't aware that not getting screened for cancer is directing putting yourself on the line. I am very grateful for the free services I received here," she said.
Some 110 people got their blood glucose level tested while 64 women received information on the importance of getting breast and cervical cancer screening.
A one-year-old baby also got her blood glucose level tested, while eight adults were referred to Zvishavane District Hospital after being found to be diabetic.
Lion’s Club chairperson, Martin Muserere thanked Nyaradzo Funeral Services for helping them with tents and Zvishavane District Hospital for providing them with two nurses and three lab technicians for the exercise.