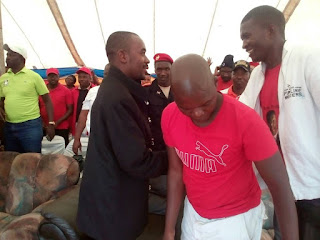 With the main opposition MDC Alliance bracing up for its congress in October next year, trouble seems to be brewing in paradise as party president Nelson Chamisa’s loyalists are fighting teeth and nail to have him go uncontested, TellZim News can report.
This has however triggered a backlash from other top brass leaders who are angling to challenge Chamisa at the congress.
It has been reported that Chamisa was under pressure from the likes of secretary general Douglas Mwonzora and deputy president Elias Mudzuri who harbour ambitions to take Chamisa’s job.
Though Mwonzora and Mudzuri have publicly denied harbouring any ambitions to challenge Chamisa, inside sources say the two are working underground to strike a Chamisa a devastating blow once he blinks.
Most of Chamisa’s loyalists who sat in the recent National Executive Council (NEC) are reported to have pushed for the ouster of Mwonzora but Chamisa vetoed the decision at the 11th hour.
With Mwonzora saved, Chamisa loyalists set their target on Mudzuri who found himself in the eye of the storm when he showed up for a meeting at State House early this week in his capacity as a senator.
Mudzuri was seen posing for pictures with President Mnangagwa, a move exploited by his enemies to persecute him.
Mudzuri was heckled by Murisi Zwizwai, Charlton Hwende among others for going to the meeting ‘clandestinely’ and meeting with an ‘illegitimate’ President.
A defiant Mudzuri, who calls himself the Ramaphosa of MDC, however later responded by saying he was prepared to be fired from the MDC if what he did was wrong.
“It is with sadness and unfortunate that my fellow junior parliamentarians would want to play petty politics on something that is part of my terms of reference as a party deployee.
“My confusion to all this stems from the fact that, if what I did was “illegal” to my fellow parliamentarians, then I want to understand what we are still doing in parliament as a party and wasting taxpayer’s money.
“I went to State House not to appease President Mnangagwa, but to respect the office of Parliament. If I am wrong and they are right, I would be proud to be fired from the party because I represented the Party in Parliament business. It’s sad that my very colleagues, were fully engaged in parliament business at HICC on post budget consultations, a budget presentation that saw MPs under attack from police. What hypocrisy!
I believe that I went to State House not to betray anyone nor did I do it nicodemously, but in the full knowledge of my colleagues who then faked theatrical accusations. The nation is faced with acute economic challenges under a failed leadership of Zanu PF. That must be our focus, but to abuse my person this way is very unfortunate,” said Mudzuri.
The MDC structures have been deeply divided on the fate of Mudzuri with members in Masvingo particularly in Zaka, where Mudzuri comes from, rallying behind him.
Inside sources told TellZim News that there are secret meetings being held at night to propel Mudzuri to challenge Chamisa at the congress.
The source identified some members within the MDC Alliance provincial structures who are already consolidating Mudzuri strength on the ground.
“Last Sunday there was a meeting which was convened by Silas Man'ono, Mudzuri's personal assistant and Sydney Chisi was coordinating. Other members who attend the meeting were Mushonga of Zaka Central, Ndekere of Chivi South, Damba of Chivi North, Dumbu of Zaka West, Tichaona Chiminya, John Nyika and David Charirwe of Masvingo Urban who is being propped to be the faction's provincial chairperson,” said the source.
Mwonzora was also accused of having night meetings in Masvingo but he rubbished the claims when TellZim News sought clarification from him some time ago.
“It is within my constitutional rights to contest Chamisa at congress so I don’t see why people are making a big deal out of it. As for meetings, I have never been in secret meetings with anyone,” Mwonzora told TellZim News then.
Provincial chairperson James Gumbi could not be reached for a comment as his mobile went unanswered.
Political analyst Dr Takavafira Zhou said Mudzuri should introspect and walk the correct party line because there are a lot of allegations against him.
“The whole Mudzuri issue shows that the MDC Alliance needs to sit down and work collectively. Mudzuri was wrong on his part because he should have consulted his party before attending that meeting.
“Mudzuri has to tore the correct party line and consult others before making such big moves. There is need for political maturity within the MDC Alliance and the move by other parliamentarians to confront Mudzuri in front of people was ill-advised. They should have followed the correct party procedure and summoned Mudzuri for a hearing,” said Dr Zhou.