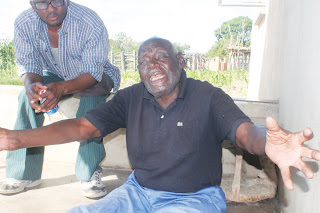 … as they are served with
eviction notices from ZERO farm

Scores of people who settled at Zero Farm at the onset of the Land Reform Programme over 18 years ago have threatened to occupy the adjacent Great Zimbabwe monuments as they do not have anywhere else to go, TellZim News can report.
Earlier this month, government served the villagers, most of whom belong to the Mugabe clan of moyo totem which lays historical claim to the world-famous monuments, with eviction notices, saying they irregularly settled at the farm.
In the notices, dated January 08 2019, the government instructs villagers to leave the farm within seven days, claiming the villagers were contravening Section 3 of the Gazetted Lands (Consequential Provisions) Act Chapter 20:28, by occupying the said property without lawful authority.
One of the affected village heads, Henry Makusha said there was no way over 1000 families, most of whom had been living in the area for close to 20 years, were going to vacate without good explanation from the government.
“We are not going to leave. We have nowhere else to go because this is our ancestors’ place. If we are to vacate this area and go back where we came from, then we would have to reoccupy Great Zimbabwe because that’s where our forefathers were laid. We have no other home that we know except this place,” said Makusha.
"The way these letters were served is not the right way because they just came and forced villagers to sign the letters. They even arrested us (village heads) for resisting," Makusha said.
The Mugabes blamed their woes on National Council of Chiefs president Fortune Charumbira whom they accused of using his political muscle to grab their land claiming that the area was a buffer zone for Lake Mutirikwi.
“They have not done anything to people at Sikato Farm who were put there by Charumbira himself yet they are giving us all this trouble. Sikato Farm is even closer to the dam than our place,” said one villager.
Charumbira belongs to the shumba sipambi clan whose claim to some areas around the world heritage site has for long been problematic in some cultural circles.
One of the Mugabe elders, Samuel Rufuharuzivishe Mugabe said the government would rather shoot all of them if it did not want them to remain on the land that he said was rightfully theirs.
“We gave Zero Farm to our growing families so if that is wrong, then they should find a way of rectifying it rather than evict us. If they continue tormenting us they risk the wrath of our ancestors. We are not going anywhere! If they want to kill us let them do!” said Mugabe.
Evelyne Dovorogwa, who built her home in Chikutuva Village 16 years ago, said the only option she had was to go back to the ruins should they be forcibly removed.
She also said they were forced to sign the eviction notices against their will as they did not understand what was written.
“Why didn’t they tell us long ago when we came here? I spent 16 years here but they have not even called for a single meeting over our settlement here. We pay all taxes, our children get births written Chikutuva Village but now they are saying there is no such village,”  said Dovorogwa.
Other villagers said they would have complied with the order had it been served in time although it would have been difficult for them to lose their crops and building as well as their children’s education since they had already been enrolled at different schools with school fees having been paid already.
Masvingo District Administrator (DA) Ray Hove was quoted in a state newspaper confirming that the villagers were issued with eviction letters and were expected to move, claiming they did not have no offer letters.
Other villagers said Zanu PF had always told them that their stay at the farm depended on how politically loyal they were especially during elections, and they have always been ardent ruling party supporters.
About 1 000 villagers were affected and these come from six villages namely Chikutuva, Makavasa, Marikutirwa, Makasva, Banga and Sithole villages.
Nothing had, however, happened after the expiry of the deadline with villagers saying no action had been taken against them.