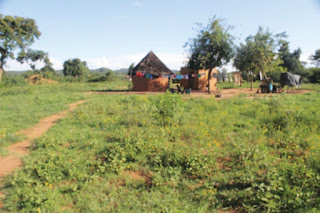 The eviction exercise would have seen hundreds of families being evicted from Zero Farm in Masvingo Rural district, their home for 19 years

CHIREDZI - A Zanu PF Masvingo Provincial Coordinating Committee (PCC) meeting recently shot down government’s plans to evict thousands of illegally resettled farmers in Chiredzi North and some parts of Chiredzi West, saying those farmers must be regularised.
The Ministry of Lands, Agriculture, Water and Rural Resettlement had announced that government was taking steps to correct irregularities created by the chaotic Land Reform Programme.
Zanu PF Masvingo provincial secretary for information and publicity, Ronald Ndava told TellZim News removing the farmers would be tantamount to abandoning the party’s vital voting bloc.
Chiredzi North constituency recorded a very high number of Zanu PF voters, rivalling the perennial voting giant of Uzumba Maramba Pfungwe in last year’s harmonised elections.
“No one is going to be evicted from where they were settled but people will be reorganised according to the plan in which there will be separation of A1 and A2 farmers. A1 farmers should be ploughing 6ha and grazing their livestock on 14ha, meaning each family will have 20ha,” said Ndava.
He said the party acknowledged that there were many people who were settled illegally by local party chairpersons and kraal heads.
“We have families that were allocated land by village heads, some were settled along river banks while others settled in wildlife sanctuaries. These areas are not for human settlement.
“Under such circumstances, authorities will be reorganising the people. They will move people who are wrongly settled to regularised farms. No one is going back to the reserves; this will just be an excise to solve issues related to the accessibility of drinking water, schools and clinics while differentiating between grazing, cropping and settlement places within a community,” Ndava said.
A few weeks ago, Minister of State for Masvingo Provincial Affairs, Ezra Chadzamira who is the also the ruling party’s provincial chairperson, said government was going to remove all irregularly settled people in Masvingo and Chiredzi North districts.
Areas which were under spotlight in Chiredzi North include such properties as Lavanga, Masapasi, Angus and Mukazi which are all said to be covered by Bilateral Investment Promotion and Protection Agreements (BIPPAs) as well as other properties like Feversham, Arda Magudu, Mutirikwe Section, Wasara Wasara and Chegwite.