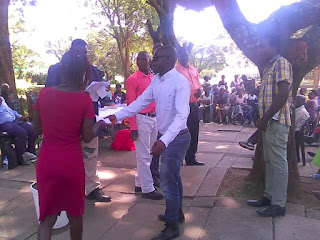 GWERU - Proceeds from the 2018 Mayor’s Christmas Cheer Fund brought relief to many people with disabilities and other disadvantaged groups last Friday after OK grocery vouchers and cash was handed over to them at the Civic Centre.
One of the beneficiaries was Faith Shingaidzo Chikaviro of Ward 4 who said her $50 grocery voucher will make her life better for the coming few weeks.
“I am disabled so I can’t do enough for the family. This will help us a lot and I hope it doesn’t end here,” said Chikaviro, whose mother is blind.
In his remarks, City of Gweru mayor, Josiah Makombe thanked partners who made donations in cash and kind, saying their contributions were making a big difference in the lives of the poor.
“I am grateful to those who made contributions to the fund because they have taken us this far. They have remembered the elderly, people with disabilities and our children’s homes,” said Makombe.
He said the facility raised $45 000, adding that some of the money will be channelled to a project to help female school children access sanitary wear.
“Around 500-600 people have received vouchers today and we are going to launch a sanitary wear programme for the girl child in our schools. We know the challenges that female pupils face in the difficult economic conditions we face,” said Makombe.
Bluehills Children’s Centre, Midlands Children's Home, Zimcare Trust and St Daniel’s Centre received $300 in cash each.