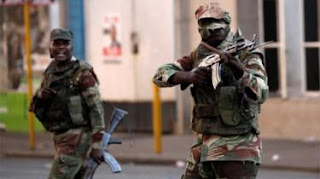 MASVINGO – While there is an outcry from members of the public to have members of the Zimbabwe National Army (ZNA) removed from the streets for brutalising and victimising innocent civilians, an MDC Alliance councillor with Masvingo Municipality dropped a bombshell in the full council meeting held on Monday this week after he pleaded with the management to engage military services to restore sanity in the city.
Ward three councillor Tarusenga Vhembo, an ex-soldier, said it was high time that council hires the army since both municipal and Zimbabwe Republic Police (ZRP) had already failed to stop illegal taxis from pirating in town.
According to Vhembo, having the army in the streets to control operations has become ‘fashionable to the extent that the council needed to also move with times’.
“It’s not a secret that the army is now everywhere. We see the army manning shops, controlling queues and doing all sorts of things in town. Why can’t we engage the army as the council to stop the menace caused by illegal taxis? We have seen that ZRP is reluctant to assist us because they are benefiting in this chaos. Let’s hire the army,” Vhembo pleaded in the full council meeting.
“Only soldiers will bring back sanity into the city because people seem to have lost respect and fear of the police,”  added Vhembo.
The city council has failed to control the Harare, Bulawayo and Gweru bound buses who are supposed to be using the Mucheke Rank but have created their own at Croco Motors.
Buses to Mutare, Gutu and Zaka have also shunned the designated rank opting to operate at the Family of God Church illegal terminus.
Public transport to Chiredzi, Chivi and Beitbridge have also refused to use the Mucheke Rank opting to operate at an illegal site near Benjamin Burombo complex.
Mayor Collen Maboke lamented the lack of competence in the municipal police saying in other cities they were feared more than ZRP and soldiers.
However, Maboke said it was not possible for the council to hire soldiers citing constitutional limitations.
“We follow the law…the circumstances that allow us to engage military services are clearly stated in the constitution,” said Maboke.
The city council refuses to recognise the Croco Motors illegal rank but they send their police officers to collect ranking fees from the buses that use the makeshift rank.
Share !