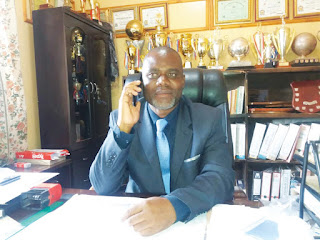 Pamushana High School, the flagship of the Reformed Church in Zimbabwe (RCZ) run schools, has stood the test of time attaining academic excellence over the years under the leadership of former head Johnson Madhuku who has since handed over the torch to Raymond Ndega, the man now charged with upholding the bar.
Ndega was quick to admit that the task ahead was not a walk in the park saying on top of his to do list is upholding the standards in both academic and extra curriculum activities.
The former Chibi High School deputy head and Boniface Machingauta protégé, has paid tribute to his predecessor saying he did a good job that made the school arguably the best in its class and most sought after in the Southern Region of Zimbabwe.
“The bar has been set way up high and every parent dreams of sending their children here because of the results produced which are second to none.
“My predecessor did a good job to put this school on the map and now the task rests on my shoulders and I intend to uphold the standards and go even further.
“We have a lot to do and by God’s grace, we will make Pamushana High an epitome of academic and sporting excellency,” said Ndega.
Ndega takes over from Madhuku who has since joined active politics and was elected Zanu PF’s Bikita East Member of Parliament (MP).
With an enrolment of 1 201 pupils, Ndega commits to teamwork to make the job easier and commented the teaching staff compliment for their result based approach.
“As the head, you are only overseeing the operations but you do not go into the classrooms to teach. It is the teachers who make it possible.
“I applaud all our teaching staff for doing a wonderful job in making sure that they get the best out of our pupils. We will chart the way forward together as a united team.
“Our teachers are always willing to go an extra mile and that gives me a lot of hope and courage that we will share the load and make proud our stakeholders and the Church as the responsible authority,” said Ndega.
Ndega said he will embark on massive infrastructural development to provide the best learning environment for the pupils.
“We need to improve our infrastructure from classrooms to dormitories. The high pass rate we get should resonate with the learning environment.
“To maintain our sporting dominance, we are in the process of constructing a multi-purpose sporting arena which is being done in different phases. So far the first phase is nearing completion and with resources permitting, we will initiate the second phase before year end,” said Ndega.
Pamushana High is swimming in glory celebrating a milestone achievement in the just announced 2018 ‘A’ Level results with 71 students scoring beyond 15 points.
Share !